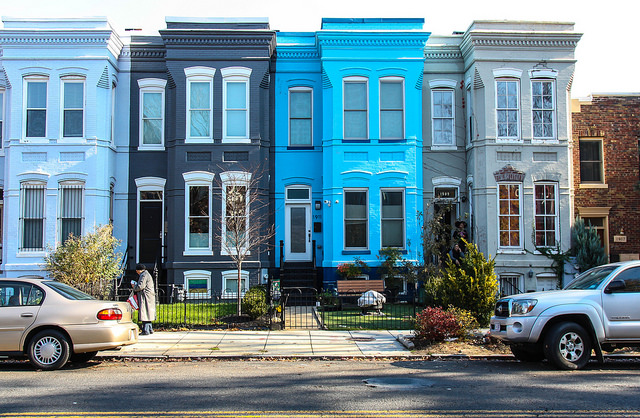 From "Chocolate City" to "Cappuccino City"

A proud Michelle Obama and smiling Barack stand together, painted on the side of Ben’s Chili Bowl on U Street, the “Black Broadway” of DC. The business, opened in 1958 by the Ali family, has become a landmark of the Shaw neighborhood and it has gone through most of the social and cultural changes in the area.

In the 1950s and 60s, Shaw was the pinnacle of African American culture and society. But when Martin Luther King Jr. was assassinated in 1968, riots and fires broke out in the neighborhood, changing its character and semblance for years to come.

“By the 70s it was a drug ridden community that turned from such a beautiful, wonderful place to an actual ghetto,” said Kamal Ali, one of Ben’s Chili Bowl owners. “You had open air drug markets on the corners, prostitution, you know, my friends weren’t even allowed to come down to this area. That’s how bad it was.” 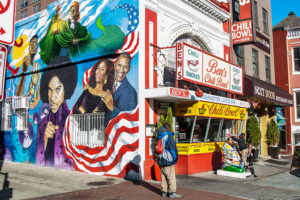 The Washington D.C. metro came to Shaw in 1991, and with it came new businesses.

“It became more diverse than ever and all of a sudden we had real estate development and the start of gentrification in our neighborhood,” he said. 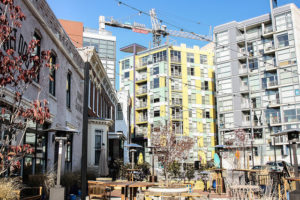 According to the U.S. Census Bureau, in 1980 the community was 81 percent African American, but by 2010, the number of black residents had dropped to 30 percent, and 53 percent of the Shaw’s residents were white.

“It’s totally changed,” said Ashton Znaniecki, an employee of Polish origin who works at Compass Coffee. “It’s just strange to walk around and see all these brand new buildings. And I mean I hate to say it, but to see all of these white people. And I know it was a majorly black neighborhood.” 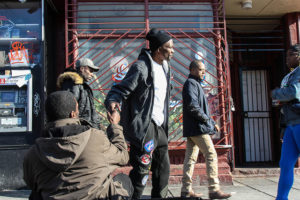 Compass Coffee is one of the many new, upscale eateries that opened in Shaw in the last decade. Professor Derek Hyra sees it as a spatial indicator of gentrification.

Hyra, author of “Race, Class, and Politics in the Cappuccino City,” holds that Shaw, once an “iconic ghetto” associated with poverty, crime and public housing has become a hip, edgy “gilded ghetto” that is now higher income and expensive.

“There’s this legacy of the past in these communities that is commodified and sold at a higher price to gentrifiers,” said Hyra.

“Black branding” is the term that Hyra uses to describe this phenomenon, where business developers advertised Shaw’s African American identity as a marketing pitch to attract white newcomers.

Doctor Hyra threw another term in the hat and said that white millennials are in search of that authentic, ghetto feel by “living the wire,” a phrase inspired by the HBO series “The Wire” about “inner-city black life in Baltimore”.

But there are disagreements in theorizing gentrification. According to Professor Bernard Demczuk, a historian of African American history, gentrification is a historical, natural process that in fact gained its name improperly. It should be called urbanization, the third of four great waves of American cities, which for Shaw started in 1991.

But gentrification for Shaw black residents  is less about theory and more about numbers. In the last decade, aggregate income has risen and property values have skyrocketed. 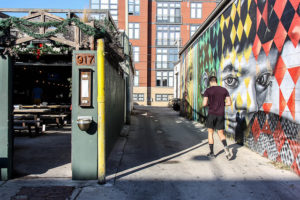 Alexander Padro, a Shaw resident since 1997, is chairman of the Advisory Neighborhood Commission and executive director at Shaw Main Streets, a nonprofit organization with the mission to revitalize Shaw’s 7th and 9th “commercial corridors.”

He bought his house in 1998 for $155,000. The house was identical to that of his immediate neighbor who bought his in the 70s for $17,000. When his neighbor passed away, his heirs sold the unrenovated house for close to $800,000 and the developers who bought it, renovated it and resold it for $1.3 million. But Padro thinks these sales benefits the neighborhood. Despite a decline in black residents, he said no one has been forced to leave Shaw.

“The great thing is we’ve been able to keep the people here,” he said. “That’s rather remarkable when you look at most remodeling efforts in cities around the country, displacement is usually the order of the day.” 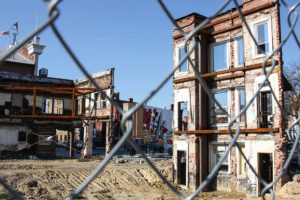 Padro said gentrification can also be an opportunity for those longterm residents to resell their homes at over triple the price they first acquired them for.

And Ali of Ben’s Chili Bowl agreed that even with the changes, some longtime residents have cashed in.

“Along the way are there some casualties? Are there some senior citizens who had to sell their properties ’cause they couldn’t afford their taxes anymore? Sure, some people are pushed out,” said Ali. “But other people are sold out in a very favorable way because they never imagined their home to be worth so much money.”

Amidst their “revitalization” efforts, Shaw Main Streets has helped some African American businesses, like Wanda’s, stay in their original spots.

Wanda Henderson, an African American woman, waltzed around her salon, Wanda’s on 7th. It’s been here since 1997, but not without a fight. In 2010, a developer bought most of the block to turn it into a shiny, glassy project forcing her to move her store temporarily up George Avenue. 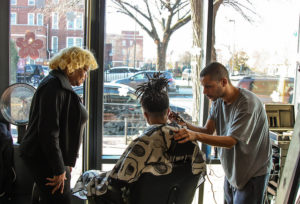 “I had to make my own positives because they gave me a terrible time to come back,” said Henderson. “But it was still worth the fight because I was determined to come back. I have the right to be here, and other people do, too.”

Like Henderson, many longterm residents and business owners welcome change, and want to be a part of it, making sure they’re part of the community, even with new development. But there’s always a price to pay, and it adds up to much more than money.

“To say ‘hey, here’s some money. We’ll just find you another place because we’re gonna tear down these houses to build’… you know, whatever. It’s hurtful,” said Lakisha Davis-Small.

Her family had a house on 5th and Q Street for 40 years, but in the end they were forced to sell.

“The house is still there, but they have built so much around it,” said Davis-Small. “I plan on buying it back one day to turn it into a transitional home for those who are less fortunate and don’t have any support.”

A house isn’t the price you pay for it. It’s a home, and for most people, whether black or white, the memories attached to it are priceless.

According to Padro, no one in the community has been forced to leave their house because rents have gone up. And those who had a hard time affording market rent were given housing vouchers that allowed them to stay on their properties or move somewhere else by paying “no more than 30 percent of their annual income for housing.”

Kenny, who did not want to give his last name, grew up in Shaw. He recently got a beard trim at Gregg’s Barber Shop, one of the few businesses in the area that have survived for over 80 years. Kenny said he moved out because of rent increases.

“To me, a subsidy is the same thing as giving me a voucher,” said Kenny. “It’s demeaning and degrading.” 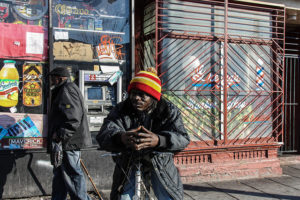 In 2014, Kelsey Gardens, a 54-unit garden-style apartment complex on 7th, was torn down and replaced with the Jefferson Market Place, a mixed-use development building that includes 281 luxury apartments and nearly 13,400 square feet of retail space.

“Everyone was going crazy cause you needed a place to go,” said Carole Dun, a former resident in Kelsey Gardens for 20 years. “They finally gave us Section 8 vouchers, so we could get other housing, but they still charged us electric, water and trash removal. You had to really budget your money.”

Gentrification in Shaw has encouraged investments, lessened crime and given the neighborhood more than a fancy makeover.

However, according to Hyra, the displacement of long-term residents isn’t only physical, it’s also political. White newcomers have taken over the institutions and vouch for typical “gentrified amenities” like dog parks, bike sharing facilities and hip beer gardens, leaving behind the needs of the longterm African American residents. 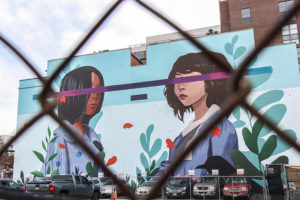 “Although low-income people are living in what is perceived as a safer community, they’ve lost their political representation,” said Hyra.

“The Shaw dog park is an example of a place where people of all races and all economic strata go and walk their dogs,” said Padro. “He (Hyra) makes it sound like the dog park is some kind of elitist place, that unless you drive up in a Maserati you can’t walk your dog. It’s ludicrous.”

Contrary to what Hyra defines as “diversity-segregation” or “micro-segregation,” today, the Kennedy Recreation Center, a crucial rendezvous for African American residents for years, looks integrated.

“This neighborhood is diverse and I think it’s really reflected in this playground,” said French-born Stephanie Pezard, a mother who moved to Shaw six years ago. “I would never say that the most recent residents aren’t coming (to Kennedy Recreation Center).”

But not all that glitters is gold. And stereotypes are hard to dismantle.

“The white people, they’re alright,” said Dun. “Some of them won’t ride on the elevator with you. Or they close the door real quick, like they avoid us. I guess they’re just trying to be cautious.”

Shaw was once the beating heart of the Chocolate City, and today, according to Hyra, it has been replaced by a more expensive Cappuccino City, where white foam and black coffee are mixed together to create a new reality. But for some, it will take time for the two to blend together.