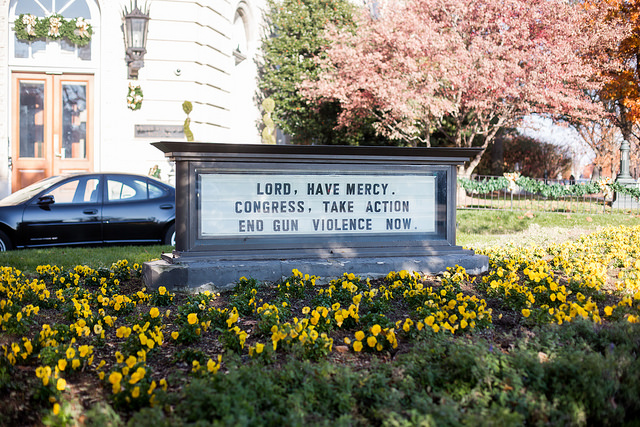 Gun Violence soars, but laws to stop it fail

Jordan Davis was a 17-year-old African American teenager from Atlanta. He was staying with his father in Jacksonville, Florida, before starting his undergraduate education back in Georgia. But college never happened for Davis. He was shot in the car with his friends at a gas station on Nov. 23, 2012, by a middle-aged white man after an argument over loud music.

Davis is one of many victims of gun violence in a country that has been rocked by mass murders. Forty-nine people were shot and killed in a nightclub in Orlando, 58 during a country music festival in Las Vegas and 26 during a church service in Sutherland Springs, Texas. The number of gun violence victims across the country continues to grow rapidly, yet many families of those victims and gun violence survivors say they are not getting anything more than “thoughts and prayers.”

“Thoughts are prayers are absolutely not enough,” Davis’ mother, Lucia McBath, said. “I don’t believe there are enough legislators on Capitol Hill that really have the best interest at heart for the constituency that placed them in office.” 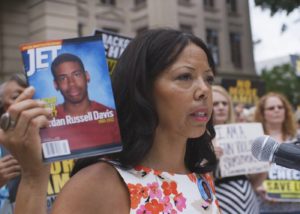 According to a study in The American Journal of Medicine, Americans are 10 times more likely to be shot to death than citizens of 22 other high income countries. In the past year, there have been 56,545 gun violence incidents, which include 14,241 deaths, 28,971 injuries and 324 mass shootings, according to GunViolenceArchive.org.

The NRA and pro-gun activists believe that an abundance of guns is not the main cause of firearm related deaths and do not consider gun laws to be effective measures.

“If you are going to pass legislation to try and have it impact on criminal violence involving firearms, you’ve got to punish the perpetrators, not the law-abiding gun owners,” Dave Workman, communications director for The Citizens Committee for the Right to Keep and Bear Arms (CCRKBA) and spokesperson for Jews For The Preservation of Firearms Ownership, said.

According to the FBI’s Crime in The United States, 2015 statistics, 71.5 percent of homicides across the country were gun related. Workman said that the certainty of punishment is the best way to keep the perpetrators committing those crimes in check.

“If you catch somebody in the act of committing a crime, say an armed robbery, and you prosecute that guy, you don’t suspend that sentence,” Workman said. “You lock them up, you get them off the streets.”

According to Workman, only 1 percent of guns that are used to commit crimes are obtained legally.

“There should be a law on the federal level to curb gun trafficking,” said Laura Burns, New York State communications lead for Moms Demand Action for Gun Sense in America.

Natalie James, 37, one of the seven activists with Gays Against Gun Violence who were arrested for their die-in action at the Hart Senate Office Building on Nov. 6th, said that while a complete gun ban in the country is an unrealistic expectation, certain types of firearms should be illegal.

“There is no need for people to have AR-15 or Sig Sauer military-style weapons, like what was used at the Pulse nightclub shooting for instance,” James said. “There was also a military-style weapon used in the Texas shooting and, of course, in the Las Vegas massacre. So these sorts of weapons should not be allowed in this country.”

But according to Burns, there should be no distinction between types of guns when it comes to accessing firearms.

“Our belief is that it’s the access to the guns that needs to be dealt with, that we need to keep all the guns away from dangerous people,” Burns said.

One of the arguments that gun advocates use to justify their unwillingness to curb the abundance of guns in the country is that if guns should be banned for causing so many deaths, so should the cars if citizens run each other over and get into car accidents.

“You punish the criminal, not the tool that he uses. Especially when the tool is owned by so many millions of law-abiding American citizens,” Workman said.

McBath, who now works as a faith and outreach coordinator for Every Town For Gun Safety, said that comparison of firearms and cars was just “ludicrous.”

Many nonprofits fighting for gun control are not advocating for a complete gun ban. McBath said she supports the Second Amendment. So does Burns.

“There is this idea that anyone who is pushing for any sort of limits on who can get guns or what kind of guns you can get, any kind of limits at all, that that means they’re against Second Amendment and they think that, you know, all guns should be taken away. But that’s not true,” Burns said.

According to Burns, all they are requesting are criminal background checks on every sale and stricter regulations of gun access.

“We are just pushing for common sense solutions to keep guns out of the hands of dangerous people,” she said.

Burns is a mother of two who was prompted to get involved with Moms Demand Action after the Sandy Hook shooting.

Those are the things that, in her opinion, almost everybody agrees on — gun owners, the NRA members, and the rest of the nation. According to Burns, the country is not particularly divided into two camps in terms of positions on gun access and regulations.

“It is truly not as divided as I think the gun lobby would like everyone to think,” Burns said.

Those regulations seem to be common sense solutions. However, with the ratio of gun-related homicides increasing from 10 to 12 in 100,000 people in the past two years, the U.S. has not seen any progress. Instead, the Concealed Carry Reciprocity Act of 2017 passed through the House Judiciary Committee this past Wednesday. If enacted into law, it would allow an individual with a permit to possess a concealed gun to carry it in a state different from where his or her permit has been issued.

The bill is “a huge win for the Second Amendment supporters,” according to the NRA. For those pushing for firearms restrictions, it is a huge loss.

“You are taking the authority away from states that deem what’s best for their constituents, best for the citizens and you are making them subject to any other gun owner that’s coming from a state that has lesser restrictions,” McBath said.

According to James, the bill will destroy any meaning behind individual state regulations and will force states to recognize firearms regulations that might be the complete opposite of theirs. McBath, James and Burns agree that the bill will open the flow of more guns into the streets and, potentially, into the hands of perpetrators.

“Action is what we need,” McBath said. “They’ve said too much ‘our thoughts are prayers are with the families.’ We are not buying that anymore. And there is a grassroots movement of people and individuals around this country that are going to start voting out of office these legislators that are pushing these extremist measures that have been pushed by the NRA gun lobby.”

With the NRA members and leadership constantly lobbying for more pro-gun legislation, James said that those pushing for gun regulations should be more active in demanding gun restrictions and laws.

“We should honor the dead with action,” James said.