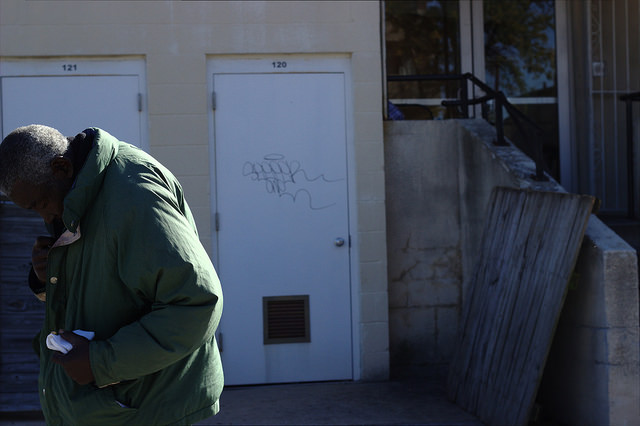 Michael Parker waited in a long line recently at the front of the Manna House soup kitchen, where a crowd of hungry men all hoped to get in a warm breakfast before their day began. The line was unruly, as the men, many with scraggly beards and disheveled clothing, tried to push their way to the front, just to get some oatmeal or maybe a hard boiled egg.

Once inside Parker, with his youthful face hidden behind overgrown facial hair and a neck tattoo, was given a tray. The volunteers poured him a steaming cup of coffee and placed two heaping bowls of oatmeal in front of him along with a chocolate pastry and a cold ham sandwich. After receiving his food, Parker found an empty seat and dug in.

It’s only his fourth day being homeless.

“It’s a long time for somebody that’s new to it,” said Parker of the four days. “I was going to go to Philadelphia or New Jersey or something like that, but I’m embarrassed to say that I’m broke right now. I can’t even afford $26 to get on the bus.” 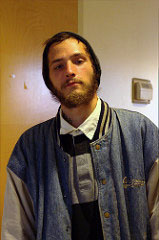 Michael Parker, 32, of Baltimore, has been homeless for four days. Photo by Alexandra Zuccoro

At 32, Parker never saw himself living on the streets of Baltimore. Over the past few weeks, he got kicked out of his apartment and fired from his job because of a conflict between his coworkers, with whom he also lived with.

Soup kitchens have been in high demand since the number of homeless has soared. According to the Office of Neighborhood Improvement in Baltimore, about 5,000 individuals contacted a county organization to seek assistance because they were homeless or at risk of being homeless in 2013-2014. Sixty percent of the homeless population are men and 80 percent are older than 25-years-old.

The homeless can be seen on downtown streets, lying on the ground, wandering into Inner Harbor restaurants, begging for money at intersections and in tents in median strips that straddle neighborhoods. Being homeless is not something these men are prepared for and getting food to eat can be the biggest struggle.

“We’re now serving over 200,” said Patty Feick, Case Manager at the Manna House, of the influx of homeless the soup kitchen sees daily.

Patty Feick, Case Manager at Manna House, describes the type of homeless people she works with in the Baltimore community.

The Manna House, established in 1973, originally started off as a small church association that distributed cans to the local homeless, but quickly boomed into an expanding organization that provides an array of services for the homeless in Baltimore, including assisting with applications for Healthcare and Social Security. Most of its customers are men. The organization’s most popular service is still their soup kitchen that opens every morning and midday for snacks.

The staff at the Manna House have a big job to do.

For over four years, Augustine “Von” Flint has served as the big boss of the Manna House kitchen. She keeps the lines moving and makes sure everyone has a full tray of food.

When the line of homeless files in, they smile as they hear their “Von” shout, “Hey baby! Now y’all have a good time!” “Von” is so dedicated to her work because she said she truly loves it. As the homeless come in she shows them to their seat and cleans up after them.

“I love serving and greeting people,” said Flint. “We’re here to look out for people, be concerned for people.”

For few minutes the Manna House tries to make them feel like family. They congregate at long tables and happily greet each other while they eat. Many are already familiar with each other from prior visits and are often seen walking out of the kitchen together into the empty streets.

Feick believes that bringing a social aspect into the environment is essential for any soup kitchen. She said it is important for the homeless to feel they’re together, because out in the streets there aren’t many people for them to talk to.

“Being homeless is lonely and this provides a place for them to gather. So you’ll see them out (in line) even while they’re waiting, they’re chatting, they’re talking to each other,” said Feick. “It helps give them a little piece of structure in a very unstructured life.”

Although some members of the homeless community have families, they can’t support them. A few of the men in the soup kitchen line spoke about their wives and “baby mamas” kicking them out because they weren’t “bringing anything to the table.”

Although unemployment rates have dropped drastically since 2010, Baltimore City still hovered at 8.7 percent in 2014. These statistics still tower over the national average of 5.1 percent.

Joseph Mac, 58, said that a lot of his medical issues make it harder for him to work. He has intense pain in his right hand which he said makes it hard for him to life heavy objects and is on heavy medication

“I’m retired and right now I don’t have the money to buy my own food,” he said with a stutter. “That’s the only reason that I’m coming here.”

And many of Baltimore homeless have a criminal record. Just this year, there have been 753 shootings, 7,561 violent crimes, and 22,789 property crimes reported by the Baltimore Police Department. There are few options for men who have been arrested even if they want to turn their lives around.

“I’ve been trying to find a job, but my background is so bad they won’t hire you,” said Harsh “Steve” Herbert.

According to Herbert, simply walking down the street without running into some kind of conflict can prove to be a challenge. Getting up from a sidewalk slumber to dodge a bullet is a reality. But he doesn’t mind.

“I don’t mind walking because I couldn’t walk at first. I got shot at eight times and was in a wheelchair,” said Herbert. “It’s hard out there.”

Manna House volunteer, Austin Lee, is glad that there are still places that keep their soup kitchen doors open to everyone. He doesn’t believe it’s right to make judgements about who deserves help.

“I think there are a lot of programs here and sometimes they have a very different focus among them,” Lee said. “So they’re sometimes serving ostensibly the same needs, but they’re serving a different population, they use different filters. One thing I like about Manna House is there really are no filters.” “I love the fact that whoever walks in gets served.”

The soup kitchen ends at 10:30 a.m. and it is time for Parker and the homeless men to leave. Some don’t want to. They sit in stained chairs, chewing the last bit of ham sandwich, they try to use the bathroom one last time. But the once welcoming environment gets shut like a steel trap. The volunteers leave and the case workers return to their desks. A few hungry men peered into the windows, hoping to be let in. When no one comes, they reluctantly returned to the unforgiving Baltimore streets. At 11:30 a.m. the doors will reopen again for snack time.