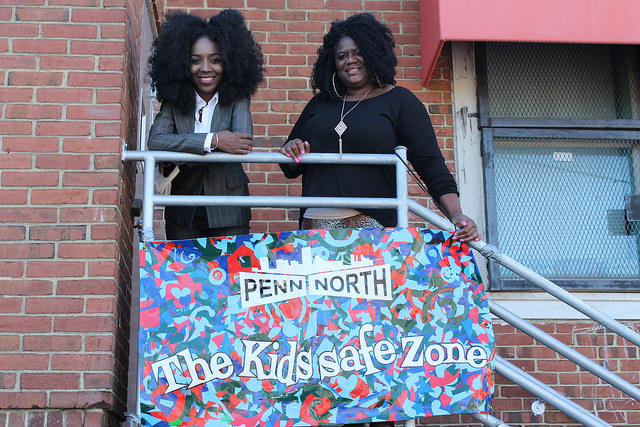 Women step up to help at risk kids

Ericka Alston interrupted herself in the middle of a sentence and yelled out a name. A boy with long dirty-blond hair, one of the teenagers piling out of the nondescript white van, turned around. His face split into a grin at the sight of Alston.

“Miss Ericka!” he yelled, loping toward her. The two met in a big bear hug, laughing. It had been a long time since he had been at the drug rehab facility, and as much as Alston wished he weren’t back, she was glad he was getting help.

Soon he ran back to join his peers, but the smile lingered on Alston’s face.

She’s the Director of Youth Services, Violence Prevention and Community Outreach for Maryland Community Health Initiatives, Inc. Penn North Community Resource Center. Her title is a mouthful, but the day-to-day means she is responsible for everyone ages 5-26 who walks through the doors of the facility, and she cares deeply about impacting each life.

All across the city of Baltimore, women are stepping up and assuming leadership roles in the effort to better the community. In some instances, they lead by necessity, because there are few if any men willing to lead. But mostly, they lead because they, like Alston, want to improve lives.

For children age 5-17, Alston created the Penn North Kids Safe Zone, which is run by Tonette Mcfadden, program coordinator, and Essence Smith, recreation assistant. The three women oversee about 50-60 children every weekday afternoon from 2-8 p.m. as well as Saturdays from 12-6 p.m.

The Safe Zone is located in Sandtown-Winchester, Freddie Gray’s neighborhood, and Alston said the riots brought to light the sad situation of most kids in the area. They had nowhere to play, she said, other than the streets.

“The overwhelming response when people were speaking on camera was the children in this neighborhood didn’t have a recreation center, they didn’t have after-school programs, there weren’t any extracurricular activities for the kids,” she said. “Kids literally played in the middle of the street. There was nothing for them.”

The Safe Zone is not just a recreation center for children, though. It also furthers the mission of Penn North Community Resource Center, which is a substance abuse facility that houses 200 adults between the ages of 18-81.

All of these things are important, she said, because children are the front line in the fight against drug and alcohol addiction.

“As much as the media would like to think that police and ambulance are first responders, these children are the ones,” Alston said. “If their parents are using drugs, and they’re using drugs in the bathroom, someone overdoses, these children need to know what to do. So it’s having real conversations with children about how to stay alive.”

For Alston, the #BlackLivesMatter movement is about more than just making sure black children survive. It’s about making sure they have decent quality of life. In fact, there’s a mantra they teach the children: “I am great, I am amazing, no one can stop my greatness because my life matters.”

Alston’s heart obviously hurt for the children  who didn’t think their lives matter.

The women running the Kids Safe Zone are trying to change that perception. The zone itself is a vacant laundromat that has been recreated as a children’s playroom. There are walls with flat-screen TVs, boxes with coloring and reading books and tables to play and color on — all donated by community members. The walls are papered with encouraging messages, from “Try New Things” to “Your Melanin Filled Skin Is Perfect.”

“This is our mini Disneyland,” Mcfadden said of the room. She spoke of the improvements they’ve seen in the children who have been attending the program since they began on June 1, children who were initially very aggressive.

“I’ve seen the change in them because when they come in here they’re realizing they can just be a child,” Mcfadden said.

Smith spoke of the familial atmosphere of the Safe Zone.

“Our kids come in and they run to us with huge hugs,” she said. “Sometimes I feel like they just need a hug.”

“It’s sad to say this, but there’s not a lot of black men mentors,” Mcfadden said. “It’s really easy to find women to mentor the girls. It’s hard to find black men … and then the ones that say they will always fall off. The women seem to be more committed.”

Candice Blackwell, director of education programs for Civic Works, has a similar experience. She works to place tutors and mentors in academic settings, and she has a passion for helping youth find and use their voice to affect change. She has often found that women are forced to take a leadership role.

“Often when it comes to working with the young people and being involved with education, that is a woman-dominated field,” she said. “It involves a lot of nurturing and mothering, things of that nature. In that environment, it’s natural, it’s kind of the expectation. I’m looked to, to (take the lead), to play that role.”

Other areas have the opposite problem. Nicole Hanson is the president of the board of Out for Justice, an organization that seeks to help citizens with criminal records reenter society. Hanson said she has found that men often take a leadership role in this area and even look down on the women, assuming they cannot face the same struggles and therefore cannot be as helpful.

“My goal is to kind of put women in the forefront and let people know that women are also affected by the criminal justice system, by dealing with a skewed identity for having a record,” she said. “Women have to really do a lot more than men do when we are advocating for reform in the criminal justice system. I don’t feel like there’s a balance. Even if you go into the prisons you see there are a lot more men’s programs than women’s programs.”

But the women mentioned also lead because they want to. They have a legitimate interest in seeing their city improved.

Blackwell became involved with Civic Works because she saw firsthand some of the struggles youth face.

“Engaging with youth at a certain level and learning about issues that impacted youth in urban communities, minorities and things of that nature — I saw the plight, the issues, the problems,” she said. “It became important to me to become a part of the solution as much as I’m able to.”

And her passion is in letting youth create their own solutions.

“A lot of the issues that our young people are facing on a daily basis are influenced by the adults in their lives,” she said. “They don’t spend a lot of time listening to the young people. There’s a lot of insight there. It’s important to help them be able to see and work through their own solutions. We’re to facilitate, participate, encourage other adults to participate, to take the time out.”

The work can be rewarding as well, Blackwell said.

“When you’re able to see a young person recognize their [potential], or see the world through a different lens than which they had seen it,” she said. “When the moment comes that you see a little bit of growth, that’s rewarding.”

Hanson’s participation in Out for Justice comes from an even more personal place.

“In 2011, I made a bad choice to be involved with criminal activity, so after that year of me making that mistake I wanted to get back into productive citizenship,” she said.

She works with legislation and attempts to change policy, believing that individuals can have an active role in changing the legislative structures that often hold them back.

Ultimately, the women of Baltimore are trying to change things because this is their city. This is their home. Smith, who grew up in Sandtown-Winchester and is now actively involved in trying to better it, said outsiders need to look a little more closely to see the appeal.

“It’s a place that if you came here and just looked, you’d have a ton of negative perceptions,” she said. “If you actually take it all in and get to know somebody, you’ll realize that everyone here is really, really nice.”

And that is what makes it all worth it.