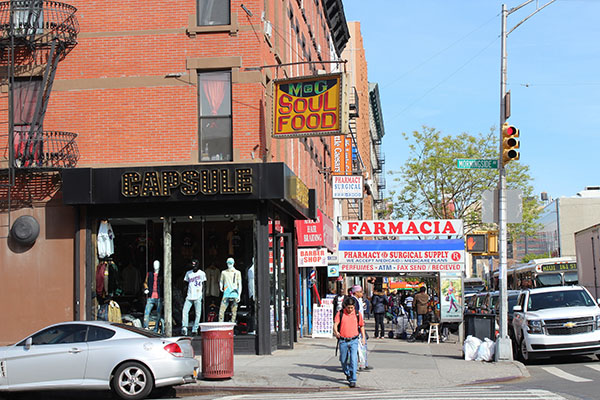 The Apollo Theater looks somewhat accidentally placed on 125th Street. The relic of the Harlem Renaissance now stands among modern day icons of consumer culture, with a Red Lobster next door and an American Apparel across the street.

A similar phenomenon is occurring nearby. The Hotel Theresa, once regarded as the ‘Waldorf Astoria of Harlem,’ now houses offices above a White Castle and Aerosoles store. The former Blumstein department store, the first to have black mannequins in the 1930’s, a black Santa Claus in the 1940’s, but for a long time refused to hire black workers, eventually shuttered its windows in the late 20th century. Now, Platinum Jewelry of 125th Street is in residence among other stores. Hurricane Sandy dislodged Blumstein’s original marquee in 2012 and it was removed, erasing the last detail of the historic building, save for its Art-Nouveau architecture.

But the changes aren’t stopping.

This year a 39,000 square foot Whole Foods Market is slated to open at 125th Street and Lenox Avenue in the same building that will house a Burlington Coat Factory, Olive Garden and American Eagle. Many residential streets are fraught with construction equipment as additional modern condos will be built into the Harlem landscape, known for its historic brownstones.

But, what could be interpreted as a commercial assault on Harlem’s history is met with mostly ambivalence by residents.

“It is what it is,” said Ron Armstead of the shifting culture in Harlem, where he’s lived nearly 50 years. “It’s a change. Change must happen. That’s life.”

Though Harlem has a storied history as an epicenter of cultural and creative expression during the Harlem Renaissance in the 1920’s, today, the borough is largely residential, serving as a bedroom community for commuters to areas like midtown Manhattan. Central Harlem’s wide, tree-lined streets are accented with nearby historic statues, like that of Adam Clayton Powell Jr. and Harriet Tubman. Fusty brownstones that sit shoulder to shoulder have entertained such owners as author Maya Angelou and actor Neil Patrick Harris.

A historically black enclave, the demographics in Central Harlem are shifting. The number of black residents have dropped by more than 10,000 people from 2000 to 2010, according to City University of New York’s Center for Urban Research. In Central Harlem South alone, white residents have have swelled from 3.5 percent of the population to 16 percent. This change in racial composition is undercut by an overall increase of nine percent in the number of people that call Central Harlem home — 109,095 to 118,665 — between the years of 2000 and 2010.

But, Harlem resists being neatly buttoned up in data. It’s complex and diverse and ever changing, especially now. Like in many neighborhoods, people gage the tone of community by what they hear from others. The Wall Street Journal attributes information to what “locals say” in its article on Harlem’s historic Sugar Hill neighborhood.

Harlem resident Christine Reedy, 27, moved to the area nine years ago and has since had a daughter. Initially, she had reservations about the school system, having “heard a lot of negative things about the schools.” But Reedy said the system, as well as free programs for kids in the community, where her daughter plays tennis, have improved. She likes the changes at play in Harlem, including the new Whole Foods, because the area feels safer, especially as she welcomes baby number two.

“I didn’t really see a crime statistic, but you would hear terrible things, you know. But, it’s changed. It’s a lot safer,” said Reedy.

Reedy’s instinct is correct according to DNAinfo’s Crime and Safety Report, which states the most serious crimes, including murder and rape, have declined by 71 percent in the precincts that cover Central Harlem from 1993 to 2010.

Harlem is also regarded as the latest borough to capture the interest of young professionals.

“I already had a group of friends who moved here and I think that seems to be a trend in Harlem for young professionals,” said Harlem resident Varsha Purda, who is white. “They will know a friend who lives up here and then people will slowly start to build a community and that’s how the gentrification of young professionals has kind of taken over this area I think.”

Jacqueline Orange, a 14 year Harlem resident and owner of Taste Harlem, which provides food and culture tours of the area, said the uptick in young professionals since she arrived has been noticeable.

“There are absolutely more young professionals,” said Orange. “It’s affordable, it’s a great nightlife, it’s a bedroom community meaning many people live and play there, but don’t work there.”

These people moving in, like the young professionals, are also the ones helping to bolster Harlem’s vibrant restaurant scene, said Orange.

“When I first came you might see a new restaurant once a year. Now you can’t even keep up,” Orange said.

On weekends the younger set can be seen brunching on Frederick Douglass Boulevard in Central Harlem’s unofficial restaurant row from 110th street to 123rd street. Here, residents can find craft coffee and bourbon tastings, as well as upscale restaurants like Vitneria which offers “inspired seasonal cuisine” and outdoor patio dining.

While Orange concedes Harlem may be losing some of its charm due to the commercialization of the area, the changes have given the community more support.

“Here’s the deal. People are really happy to have the infrastructure in whatever way it came and infrastructure is always nice because you don’t have to travel as far to get the things you need for your daily life,” said Orange. “But, it comes at a cost because you lose those unique, little things that make Harlem ‘Harlem’.”

Real estate broker Norman Horowitz of Halstead Property’s Harlem office attributes the area’s residents’ generally positive response to the changes to people’s desire for a better quality of life in their neighborhood. Plus, gentrification isn’t necessarily new in Harlem, he notes.

“All real estate goes through cycles,” said Horowitz. “ I think that Harlem is definitely gentrified. Twice, actually within the last 20 years, but keep in mind if you go back 400 years Harlem has been gentrified 10 times and in between those times there have been wars, depressions, and illnesses. It’s how it goes.”

While gentrification can be a divisive topic that places residents at odds with developers, some African Americans aren’t fighting the change.

“I like it. I mean it does affect like smaller businesses and it does raise the cost of food and the cost of living, but this is New York. We have to expect that no matter where we go,” said Reedy.

Since moving into Harlem, Purda said she has been able to find her niche in the community and establish relationships, not just within her own friend group, but with locals as well.

“It really feels like a community,” said Purda. “I know people in my neighborhood. I know people who work at the different establishments here and it feels now that not a lot of people come to Harlem unless they live here, so you definitely run into people you know all the time.”

But Purda is fully aware that she is one of the gentrifiers.

“I think, you know, [gentrification] is a phenomenon that happens a lot in places where there was previously a community and then young people with money start to move in, they start to push people out and for sure, I can’t deny that I’m part of that,” Purda said.

In 2014 the city announced its plans to expand Citi bike-shares into Harlem, among other places, by 2017. Julius Tajiddin, a community activist and founder of grassroots group Preserve Harlem’s Legacy, has voiced concerns about such decisions in Harlem. Noting the bike-share’s effects on parking space and commerce for vendors in Harlem, Tajiddin said the program isn’t designed for residents.

“The bike share is not really for us. You have to have a certain credit limit on your credit card and a certain amount of money on your debit card which could exceed what many low income families have.”

But Tajiddin isn’t opposed to all change. In fact, he supports the Whole Foods because the company has pledged to hire from within the community, among other reasons. Tajiddin’s main concern is that as an interest in Harlem grows, the longstanding residents aren’t left by the wayside.

“It’s not that I oppose [all of the changes] but what they do obviously is for the benefit and entertainment of those coming in with a different income status. That happens to be mainly white. Everything is set up for their convenience,” said Tajiddin.

Despite the changes, Armstead said Harlem remains “totally magical” because he sees the newfound interest in Harlem as something to invigorate the community, not extinguish it. He’ll even go as far as to say Harlem could be poised for a new heyday.

“This is a resurgence of the renaissance coming back and as I say it’s only going to get better,” said Armstead. “Within the next 10 years Harlem is just definitely going to be outstanding. Everyone is going to desire to come here to live and as I said, I’m just thankful to be here.”