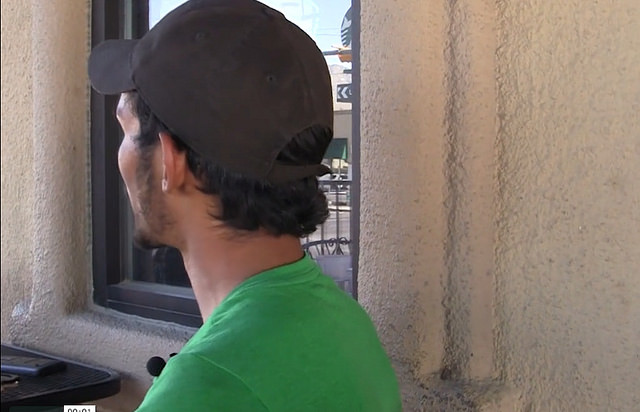 Gustavo, walked into the café with ease. Not afraid, not worried, he was calm. He ordered a coffee and talked about a study he read about the stress-relieving qualities they found in coffee, he spoke in English and Spanish simultaneously, switching from one to the other naturally, like they were the same language.

“My stepdad said, [whatever happens] ‘I’m going to put my pants on the same way,’” Gustavo, whose name was changed for this story, said.

He is a Dreamer or one of the five million young people protected by Deferred Action for Childhood Arrivals or DACA program.

Former President Obama initiated DACA to protect undocumented immigrants who arrived when they were children and matched certain criteria. They were called “Dreamers” because the criteria matched the previously failed DREAM Act. But President Trump has said he would end DACA, leaving many uncertain of their futures.

Gustavo, was one of these Dreamers, a label he despises because he said he is not living the American dream. He said it’s a joke.

“I have my feet firmly on the ground,” he said.

When Trump speaks of undocumented immigrants, the border and Mexico, he’s speaking of people like Gustavo, who lives in El Paso, a city with a more harmonious relationship with Juarez, Mexico than the rest of the United States. Gustavo laughed at Trump and bets the political climate will change within a year.

“How do you expect to stop immigration when you have half the population on the other side of the fence and you have the money and the good stuff on this side,” he said. “It’s illogical.”

He remembered living in Juarez and seeing the star on the mountain in El Paso. He saw all the lights of the United States but the star he remembers clearly.

His mom worked two or three jobs in Juarez just to make a living. Gustavo said one day she looked through the window, into El Paso, and realized she wanted a better life for her 12-year-old son.

“Like 60 percent of the illegals in this country, I crossed the border with a legal status,” he said. “[They] allowed me to.”

Gustavo came into the country like most undocumented immigrants, legally on a plane. His family moved to Denver, Colorado. His mom worked in a fast food restaurant and worked in roofing when they moved. He remembered his first job in Denver, shoveling snow with his family.

When he first arrived in Denver, he was eager to learn about this new country he would call home. But then he felt the culture shock. He didn’t want to learn English. He hated it. He wanted to keep his Mexican culture.

“I didn’t want to eradicate my native language,” he said.

Now he said he wakes up every day, has a cup of coffee and speaks to his dad in English. When his mom wakes up, he speaks to her in Spanish.

After his first year of high school, his family moved to El Paso. He started working in roofing during the summer to make quick cash. He didn’t complain about it because he remembered his mom did it.

“My mom is a badass,” he said. “She’s the perfect example of a strong woman who does everything.”

Gustavo’s mom came to give him a better future and he did not want to let her down, He knew he wanted to pursue a college degree but he didn’t think he would be able to because of his status. So, he did “what every immigrant does best,” he found an opportunity.

Gustavo is not afraid of being deported. He still drives, works and studies despite the threats made from the White House. But he walks a razor’s edge. He’s one bad encounter away from being sent to Mexico without being able to come back.

“There are people who are scared or worried,” he said. “But there are others who are fighting and they aren’t going to stop because someone gives us or doesn’t give us anything.”

His mom does not feel as secure as he does. He said she’s a homemaker now, with the television always turned on to the news. She hears threats from the government and news on deportation raids. Gustavo said she worries for her son constantly.

Gustavo spoke about an encounter with border patrol. They pulled him over and asked what was his nationality.

“I lived most of my life on this side [of the border],” he said. “You don’t try to reason with [border patrol] because they’re just doing their job.”

He said he is Mexican because he was born there. But he barely remembers it.

He can’t move between El Paso and Juarez like his friends can. He’s jealous of them when they cross.