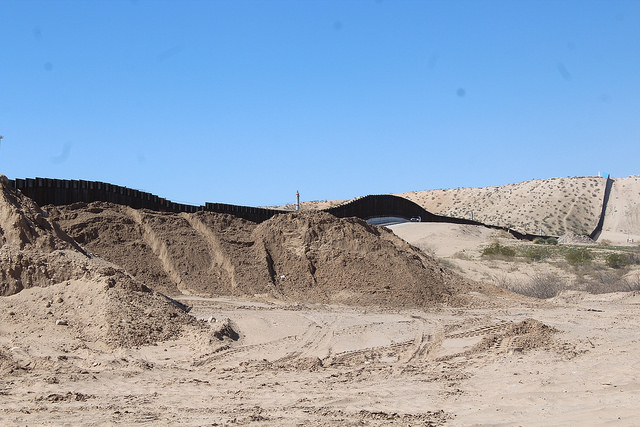 Sunland Park, a neighborhood in El Paso, is a dusty hamlet dotted with beige doublewides, pickup trucks, and mountain peaks in the distance. The roads are covered in desert sand and the unforgiving Texas sun beats down on those who venture outside. A fence divides the former neighborhood of Anapra, leaving one side in Mexico and the other in the United States. This is the kind of neighborhood that Washington politicians are constantly at odds over.

But these neighbors just live their lives, one day at a time.

“I didn’t even know they were building a wall. I’m just focused on my family,” said Jessica Castro, 37 of Sunland Park, the border fence is close to  her backyard. “We don’t pay attention to that stuff.”

President Donald Trump signed an executive order on January 25 to begin construction on the much-anticipated new border wall separating the United States and Mexico. The citizens of border cities such as El Paso will be affected more closely than those in other arears. But there is already a sturdy, high 56 mile fence separating El Paso and Mexico.

One of President Trump’s executive orders called for an increase in 5,000 agents to be stationed along the  border. Recently you could see the green and white border patrol SUV stationed  every few feet along  El Paso’s  border fence. The fence that lines the El Paso side of Sunland Park bordering Mexico is relatively new, and while it has not completely deterred those coming through illegally, the neighborhood feels at ease. 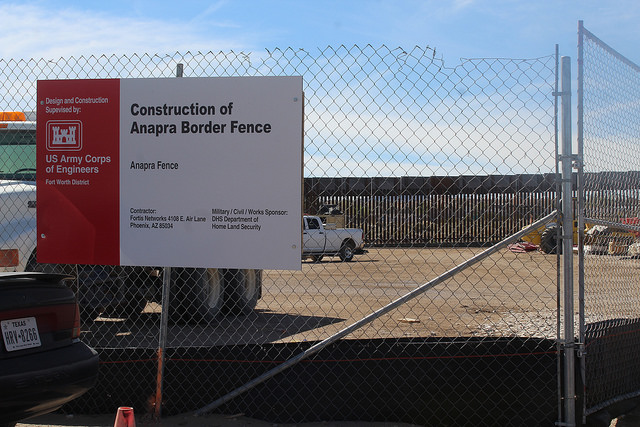 “Even with the construction, things here seem calm,” Lucia, who did not want to give her last name, said. “I am a coward. I came here from Columbia, but I am a coward. But here there are few conflicts here, few fights.”

While the President’s promise to build a 2,000-mile wall has been hotly anticipated by his supporters, residents of El Paso vary in their views of imminent changes along the border.

The fence that currently separates the two countries runs over mountains and through valleys. Southeast of Sunland Park, over a series of hills sits Chihuahuita, a small neighborhood that features a colorfully painted community center and a playground. Both are adjacent to the fence, that locals playfully call “the tortilla curtin.”

One resident, who wished to remain anonymous, was nonchalant about the President’s plans for a wall: “Build the wall. Whatever. Why is it so important?”

The problems along the border have been a constant in these residents lives and many are numb to the conflict.

“They’ve been saying this for years. Immigration reform,” The anonymous resident said. “Well, here it is. This is reform.”

Northwest of Chihuahuita, across highways and up steep hills, is the El Paso County Republican party’s office. While Chairman Adolpho R. Telles agrees with his Republican counterparts on immigration reform. he said a new wall may not be the solution.

“I think people should be allowed to come here, but we need to enforce our existing laws. If a law is not appropriate, then we change it,” he said. “I think we need a wall. That doesn’t mean a big physical structure. What we have there is appropriate. Then I think we need people to enforce the laws, and that’s Border Patrol.”

Telles himself is of Mexican descent. He is a retired accountant and has worked with companies both in the US and in Mexico.

“I worked in Mexico for years. I had a green card that the Mexican government required me to have. If I got caught in a plant working without my green card, I went to jail,” Telles said. “We are open. We have different rules. But people come here and we allow them to go into plants. We want them to see what we do and how we do it. But we expect them to go back. And they don’t and that’s the part that we don’t enforce.”

One of Trump’s many statements repeated throughout the campaign was that Mexico would foot the bill for the border wall. Few, including Mexico’s President Enrique Peña Nieto, know how the wall will be paid for, but Trump recently proposed a 20 percent tariff on goods coming from Mexico. The American consumer would be impacted the most, Telles said.

“Mexico is one of the United States’ largest trading partners. It will continue to be,” Telles said. “If they put a tariff on Mexican goods coming in to the US, the consumer pays for it.”

Both Republicans and Democrats have argued for immigration reform, though neither party can agree on a solution. Many El Pasoans believe that the systems in place now, the 56-mile El Paso border fence as well Border Patrol, could do the job. Few actively support a brand new border wall.

“We clearly need to have better border security, and there are lots of reasons there, some are economic, some are humanitarian,” Telles said. “I think what we have there, a big fence, is acceptable. There’s no question, when that fence was put up, immigration changed. When I see the fence, I see a way for people to come across appropriately.”