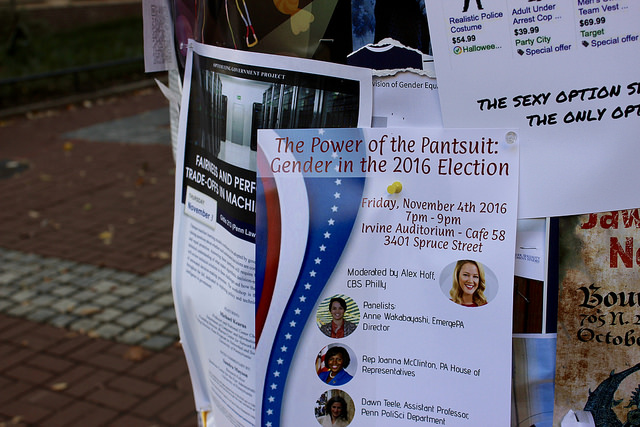 Not much election excitement on Philly's college campus

There are no signs encouraging students to vote, there are no campaign posters and no information about polling places. The small posters on the bulletin boards that have anything to do with the election on one campus read, “The Power of the Pantsuit,” and  students walked right past them on a recent busy Homecoming weekend. The wide spread apathy among college students in Philadelphia for the 2016 election can be seen across the three major campuses, but students still feel the need to vote anyway.

“I don’t like anyone that’s running, but I have to vote because you have to be a part of history because this election is crazy,” said Tyler Rosenthal, 22, of Norwalk, Connecticut, a student at Drexel University.

There are three large universities in Philadelphia area that attract a very varied demographic. Temple University is a State College, Drexel University is a private research school, and University of Pennsylvania is Ivy League, but the voter apathy at each of these schools is something they all have in common.

The Temple University Owls are a Division I school in North Philadelphia, with a great football and basketball team. On the Saturday afternoon of Halloween weekend students wore school colors while they walked around campus, past the 110-foot bell tower, to make their way to the football stadium for the big game against the Cincinnati Bearcats.

In a campus café, Amanda Lien, 18, of Minneapolis, Minnesota, talked about writing a story for Temple News about students starting a petition on campus to have the administration cancel classes on Election Day so students could vote. Lien said she is not very political, but understood why the students created the petition because they feared a lack of voter turnout in Philadelphia. The petition didn’t get very far, it got less than 800 signatures out of the 39,000 students that attend the university. The administration ignored it.

“Eight hundred signatures are fairly low compared to the population that is Temple University,” said Lien. “The administration just had more important things to worry about right now, things like cancelling classes on a Tuesday to go vote might not seem like such a priority.”

Temple University did have student groups and organizations to try and get students excited about the election and to register to vote. The tents that said “Register to Vote”, according to Lien, didn’t have any students in them besides the one person manning the table. There were other efforts, as well, with people who held up signs asking students if they cared about a certain cause. That was more successful, she said.

But students are allowed to register through their college campuses with the address they use on campus. The convenience of being able to register on campus and then vote on campus is what drives a lot of students to sign up.

“They were just out here asking questions, having the flyers ready for you, really easy, took two minutes, and done,” said Callen Hunter, 18, of Paoli, Pennsylvania.

A lot of excitement among students has been about being able to vote for the first time. Students feel proud to be able to vote and directly participate in the election even if they feel apathetic about the candidates.

“I’ve always seen my parents go out and vote, so I’ve wanted to do it, it’s cool voting for the first time,” said Sam Feldman, 18, of South Jersey, who is voting for Clinton. 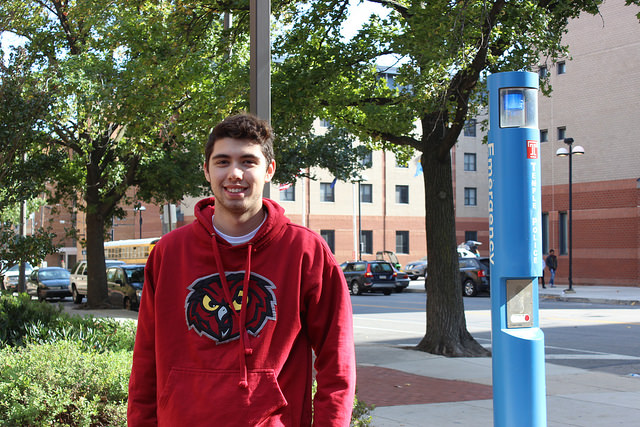 Sam Feldman, 18, of South Jersey, is a student at Temple University who is voting this year because he is finally at the age where he can. By Jennifer Cohen

With voter turnout as the biggest issue with young adults, it’s important that the 155,000 students in Philadelphia have the resources on campus to help them understand the need to vote, and how to vote, experts say. Since 2008, the percentage of 18-24 year olds voting has been declining every presidential election year. Mike Burns, the National Director for the Campus Vote Project in Washington D.C., said the organization started in 2012 because they saw that students aren’t familiar with the process of voting and want to make sure students do go vote with their help.

“I was a little bit nervous given the kind of negative tones in this election, that more of the students we engage with would be turned off by that, but I’ve traveled and visited a number of our campuses the last couple weeks and a lot of students realize there are other candidates and issues on the ballots even aside from the presidential race,” said Burns, 33. “The swing states, I think folks in those places really kind of see that they could have an impact on the election directly, and those folks don’t feel turned off by what’s been going on because they see even more directly than others what their individual vote can have.”

On a busy Homecoming weekend at the University of Pennsylvania in West Philadelphia, alumni and students dressed up in their red and blue to watch the football game against Brown University. Locust Walk, the main path through campus surrounded by tall trees and historic buildings, was filled with students drinking at their fraternity houses, families carrying their children, and friends meeting up to get ready for the game.

At Donald Trump’s alma mater, students are leaning a lot more towards the Democrats. According to a survey done by Penn College Republicans in September, 60% of Penn Republicans do not support Trump.

Sam Iacobellis, 21, who is the co-president of Penn for Hillary, said UPenn’s students are a lot more politically active compared to other campuses, despite the apparent apathy on campus.

“We do as much as we can to get people to vote, get people excited about the Hillary Clinton campaign, and bucking the millennial trend of apathy, which we have not found at all here on campus, said Iacobellis, of Manchester, Connecticut. 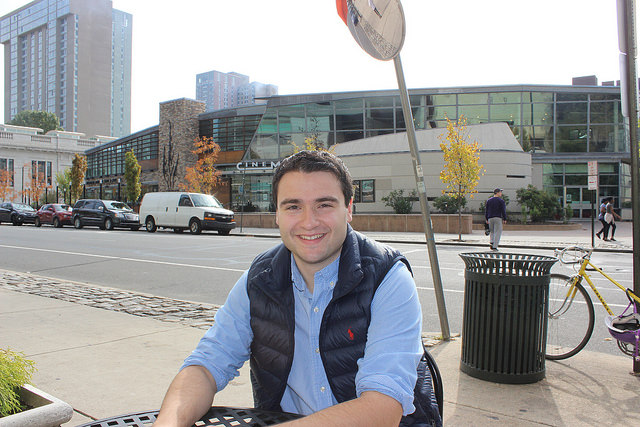 Sam Iacobellis, 21, of Manchester Connecticut, is the Co-President of the Penn for Hillary campaign at the University of Pennsylvania. By Jennifer Cohen

There may have been an effort to get students registered to vote and get excited about the election before the cutoff date of October 11th, but there is still an apparent apathy. On campus there are few signs that have anything to do with an election. On a busy Homecoming weekend, there are three bulletin boards on Locust Walk, the main path that spans seven blocks through campus, posters about the election are scarce and buried under other flyers, that no one stops to look at.

“I feel a little bit disillusioned about this election, on both sides, with Donald Trump and with the whole DNC not being 100 percent honest,” said Michael John, 19, of Lakeland, Florida. 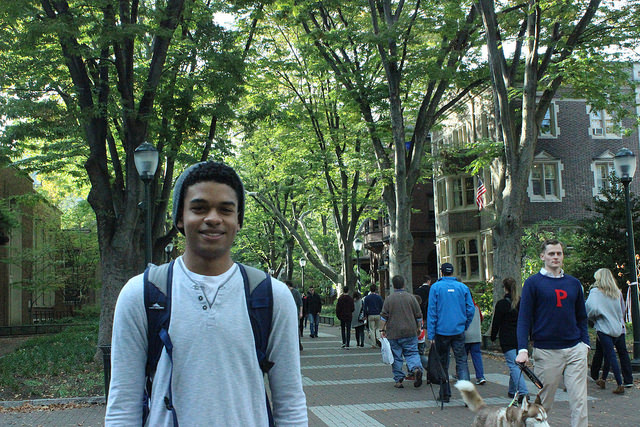 Michael John, 19, Lakeland FL, is a University of Pennsylvania sophomore who feels disillusioned about this election due to all of the lies by both candidates. By Jennifer Cohen

With over 24,000 students on UPenn’s campus only 549 people registered to vote with the on campus organization to help students register, Penn Leads the Vote. Although that number may be small, Daniel Lilling and Zakya Hall, Fox Fellows for Penn Leads the Vote, believe students are still very involved with this election.

“Almost everyone at Penn, who is an undergrad, is a first time voter and so a lot of people look at this election and they think ‘what a crazy time it is to be a first time voter,’ but definitely I think it gets people riled up about it,” said Lilling, 20, of Westchester County, New York. “Students kind of like voting in a state where they feel like their vote might make a difference.”

Drexel University, may have a dragon as their mascot, but the students at the college are more intellectual than athletic. The university is just a block away from the University of Pennsylvania, in West Philadelphia.

Students at Drexel University get riled up when talking about the election, but they really don’t care for either candidate too much. There are no posters encouraging students to vote, but most of them will be at the polls.

“Anyone who says ‘I’m not going to vote,’ it’s like no, people fought and died for the right to vote, so at the end of the day you have to pick somebody,” said Lukas Rociunas-Englert, 22, Nyack, New York. “Quite frankly if you’re going to vote third party at least you’ll do that, than not vote.”