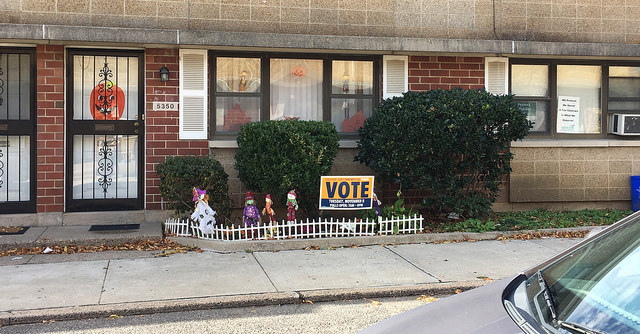 Trump calls for Election Day vigilance, but Philadelphians are not intimidated

Despite Donald Trump’s call on supporters to police the polls on Election Day, many Philadelphians remain eager to cast their ballots in the most divisive campaign in recent history.

Cameron Kline, communications spokesperson for the Philadelphia District Attorney’s Office, asserted that the likelihood of violence breaking out is low, but they are prepared for the worst.

“I would say that I hope it doesn’t happen, if it does happen it’s something that we are prepared to deal with,” Kline said. “I hope no one is intimidated or deterred from casting their vote.”

Many Philadelphians, it turns out, are not intimidated. Rather, they feel even more compelled to make their voices heard.

“I can’t wait to vote,” said Tyronna Jackson, 47, of Germantown. “Trump is a chump. He is not for us. If anybody is going to take his advice to intimidate people not to vote, that’s crazy. Nobody should be able to intimidate you about doing something good.”

Trump has indulged in an increased climate of hostility in his most recent rallies.

Trump encouraged his supporters in Altoona to, “Don’t just vote on the 8th, but go around and look and watch other polling places and make sure it is 100 percent fine.”

And in Colorado Springs he took aim at Philadelphia voters.

“Voter fraud is all too common, and then they criticize us for saying that,” Trump said at a rally in Colorado Springs. “But take a look at Philadelphia, what’s been going on, take a look at Chicago, take a look at St. Louis. Take a look at some of these cities, where you see things happening that are horrendous.”

Similarly, and more ominously, Trump sounded yet another dog whistle at his Akron, Ohio rally just 10 days later, implying that just being vigilant of voter fraud may not suffice.

Pennsylvania Trump supporters could feasibly follow Trump’s call to arms. While Pennsylvania requires that people have a permit to carry a concealed weapon on their person, the process of attaining such a permit is simple, requiring only an application and a background check.

Despite the apparent ease of bringing a weapon close to the polls, Kline does not predict violence.

Kline said that most of the calls that reach the district attorney’s office do not pertain to jeering voters spewing hate speech.

“If a call were to come in from whatever ward or division that warrants us taking action with an assistant district attorney or a detective, we will certainly do that,” he said. “But usually a lot of the stuff is smaller issues. In the morning, a lot of the issues are logistic problems, getting the polling place up and running, sometimes machines don’t work, sometimes they’re not set up, we get calls.”

Philadelphia police and the DA’s office have a plan in the rare event that something does go amiss. Kline described the District Attorney’s Task Force with units placed all over Philadelphia to do exactly what Trump asked from his supporters: to keep things “on the up and up”.

“Before the polls open on the 8th, assistant district attorneys and assigned detectives, about two dozen of those, and about 70 ADAs are part of the Election Front Task Force,” Kline said.” We will deploy some of those resources throughout the city, we know there are areas that are typically busier than others, are more contentious than others. We think we’ve staffed appropriately already.”

Philadelphia city officials are not the only ones who want to quell people’s fears about going to the polls. People for the American Way (PFAW), a Washington, D.C. voting advocacy group, views Trump’s language solely as fear-mongering rhetoric lacking in data to back up his claims that this election is as rigged as he says.

“We talk about the rhetoric from Trump about voter fraud and whether the elections are rigged, but the Republican officials are actually saying that the election process is a fair process and that they’re not rigged against any particular candidate,” said Diallo Brooks, a PFAW spokesperson. They have no evidence at that happening. It plays on folks’ emotions.”

Daisy Walden, 79, was one of the few Germantown residents during a recent visit, who admitted she felt fearful about going to her polling place, but that will not stop her.

“I will definitely go out there on November 8th,” Walden said fiercely from the front steps of her home.

Many others in her community do not echo Walden’s feelings of intimidation. In Germantown and Nicetown, two predominantly African American neighborhoods in Northwest Philadelphia, large signs dot various front yards with “Vote!” across them in large lettering. Few have candidates’ names on them. The emphasis is on exercising one’s civic duty, the constitutional right to vote.

Patrick Christmas, the policy program manager at Committee of Seventy, a Philadelphia-based nonpartisan government advocacy group, conceded that this fear rhetoric is unprecedented, yet invalid.

“We’ve never had a presidential candidate ever suggest that the election is rigged for starters, which is a huge problem, and then also suggest to folks that thy need to take it upon themselves to be vigilant poll watchers at best and vigilantes at worst,” Christmas said. “At any political rally you’re there to get people all ginned up, how many people actually act on what they’re being told is another question, worst case we could see, whether it’s in Pennsylvania or anywhere else in the country, a few folks who take it upon themselves to see that rules are followed.”

Risk of violence notwithstanding, some Philadelphians plan to vote despite feeling disillusioned with this year’s major candidates. Crystal Johnson, 54, of Nicetown expressed bitterness about seemingly halfhearted attempts by candidates to connect with their constituents.

At Germantown’s Greater St. Matthew Baptist Church, Deacon Randy Dockery comfortably spoke for his congregation about their enthusiasm for Election Day. Neither he nor his congregation felt deterred by the fear rhetoric permeating this election.

“I would assume there is quite a population that would be scared. I’m not myself,” said Dockery. “That’s nonsense what he is spitting out. But people have to go out and vote. We’re coming out in Philadelphia. We’re putting out flyers and we’re all going out on the 8th straight down the line Democratic.”

Dockery said his community has confidence in the DA’s efforts to protect their right right to vote.

“Nobody is intimidated that it’ll get out of hand, that they can’t go out and vote,” he said. 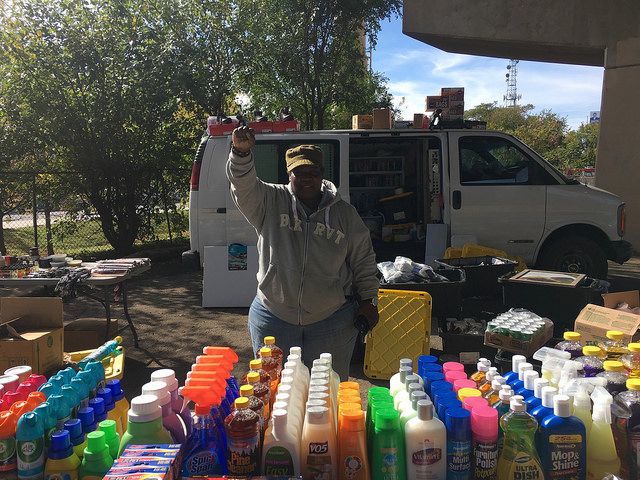 Crystal Johnson, 54 of Nicetown, says she will vote despite a risk of intimidation: “You can’t let people treat you any old kind of way. That’s your civil right, to go vote.” Photo by Cassidy Morrison

Like many of her neighbors in Nicetown, Johnson, will proudly cast her vote.

“If you have to go with somebody, you go with somebody,” Johnson said. “You need to protect yourself. You can’t let people treat you any old kind of way. That’s your civil right, to go vote. Me personally, I don’t feel threatened. I’ve been watching but I’ve been blocking out things that have been said because I know in my heart what I’m going to do.”