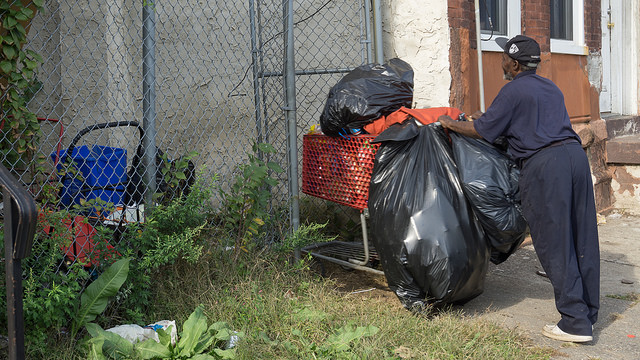 David Wilson struggled to push his bright red cart across Ridge Avenue in Strawberry Mansion. It was brimming with crushed soda cans and plastic bottles, multiplying with every chance he had to pick one up. It’s garbage to most people, but for him it’s a living. He limped down the street, using his cart as support instead of his cane, past long abandoned, dilapidated rowhomes and abandoned shops, marred by old graffiti.

But ask him about the election and his eyes light up. He was ready and eager to vote.

“Voting for Trump will be a mistake,” Wilson, 57, said passionately.

Hillary Clinton has his vote, he said.

But statistics say poor people don’t vote. Demos, a public policy organization reported that 68.5 percent of people making under $30,000 are not going to the polls. That wasn’t apparent during a recent a walk through Strawberry Mansion, one of Philadelphia’s poorest neighborhoods, a community where 42 percent of its residents live in poverty.

Residents, like Wilson, felt strongly about the upcoming election.
The problem with Donald Trump, Wilson said, is that he is focused on the idea of running the country by himself. He is not thinking of the checks and balances of the government.

“He’s saying, ‘I this—I that’ What do you mean you?” he said. “There’s a whole House, a Senate, a Supreme Court, it’s not just you. He reminds me of Hitler.”

Terrance Mitchell manages the Tire Doctor, a tire shop, on the corner of 29th Street and Sedgley Avenue. The yellow-painted brick building is cluttered with towers and shelves of tires, marked individually. The shop is a makeshift garage with the words “service department” hand painted on the top. Recently Mitchell has used his time off, helping to get the vote out.

“If you don’t get out and vote and make your voice count for something, you can’t say nothing when they take away this and they take away that,” Mitchell, 46, said. “I’m tired of seeing more prisons being built and no more schools. Stop throwing so much funding for prisons and put more into the people before they go to prison.” 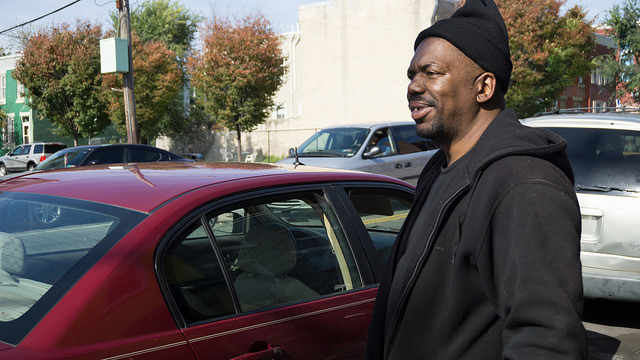 Terrance Mitchell, 46, spends most of his time working at the Tire Doctor in Strawberry Mansion. On Election Day, he will take as much time off as he needs to vote. Photo by Sophie Herbut.

Strawberry Mansion is home to one of the most violent schools in the country. Pennsylvania also has had a long battle with funding education with thousands of teachers being cut and public schools closing, including Strawberry Mansion High School.

“Give them job training programs, even the ones out there doing drugs and things like that, and there won’t be so many repeat offenders,” said Mitchell.

Residents in Strawberry Mansion have a one in 18 chance of being the victim of a crime.

Along Ridge Avenue, the main thoroughfare in the area, Ella Handson, 80, leaned against the closed shutters of a barber shop, waiting for the bus to go to church. The glass door of the building had a crack on it, but held. She said she would have missed her bus if she had to so she could talk about the election and what it means to her community.

“I lived in a time that was never, ever like this,” she said. “Police were respected and they respected others. It was a whole different aura in the country at that time.”

Handson’s voice rose as she spoke about police killing, the targeting of black men and the lack of accountability. She said she’s sure white men are equally as culpable in many of the same types of crimes for which black men are imprisoned.

“There’s a spirit of hopelessness that pulls the entire [black] community down,” Handson said. “But not to the place where Donald Trump is talking about where you can’t go down the street. That is not true. I’m not afraid to walk down the street.”

Handson was appalled by the rhetoric of the Republicans as a whole, especially the ones who endorse Trump.

“They’re against everything that a democracy should stand for,” she said. “They blocked everything that concerns blacks especially. The Democrats need to do something to stop Congress from being all Republican all the time.”

Carey Vickers, 26, stood outside a shop, smoking a cigarette. He’s the father of an 8-month-old son and he has 12 siblings, six are sisters. He said he was raised among women. Vickers said Donald Trump lost his vote when he made derogatory remarks about women.

“For him to use derogatory statements and downright perverted actions, I can’t vote for that,” he said.

Vickers is voting for Hillary, but he felt his vote didn’t matter much. He said that there was power in people voting, but he felt stuck in a system that prevents actual change.

“It’s business all in all. Republican, Democrat, it’s all business,” he said. “Money rules the world.”

Vickers said Hillary Clinton is the lesser of two evils. He believes Clinton has some good qualities but the way the media portrays her tarnishes her image too much. He said Trump is “just a buffoon.”

“Hillary is a strong candidate for the simple fact that she’s good for people,” he said. “Barack was good for people in a sense but he could only do so much because of his race.”