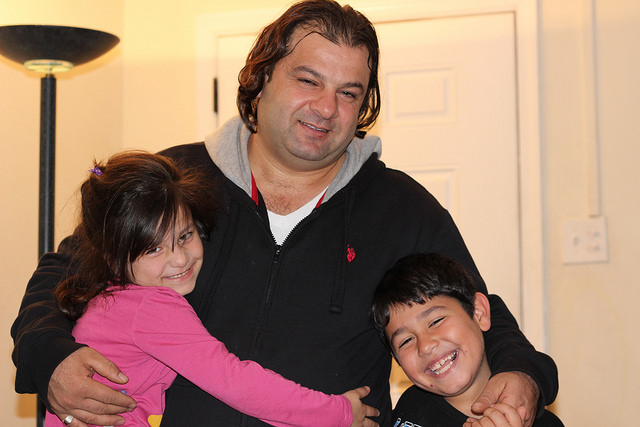 A Syrian Refugee in Philadelphia

Syrian refugee Osama Mohammed and his family settled in Northeast Philadelphia this past March in the midst of a contentious debate playing out between the Republican and Democratic presidential campaigns over what America’s response to the burgeoning Syrian refugee crisis will be.

The Mohammeds have watched with both anxiety and hope as the Clinton and Trump campaigns verbally sparred over the alleged national security threat refugees may be and the moral responsibility of the United States to help the most vulnerable of the world’s population.

“I feel like Hillary is more open to refugees,” Mohammad said through an interpreter during an interview at his home. Mohammed watched the final debate with Arabic subtitles on Al Jazeera  and felt encouraged by Clinton’s pledge to welcome refugees of all faiths and backgrounds.

“Most of the Trump language in the campaign — he’s speaking bad about Muslims and Mexicans,” Mohammed said. “He’s not respectful.”

While Democratic presidential candidate Hillary Clinton has echoed the calls of international humanitarian organizations, which have called on the United States to take in 65,000 refugees, Donald Trump has variously called for either a complete freeze on the refugee resettlement process or for “extreme vetting.”

The country’s civil war has created more than 4.5 million refugees, many of whom are stuck in a legal limbo in neighboring Arab countries, Turkey, Greece, as well as displaced millions more inside Syria.

Mohammed, 36, was among the many Syrians who participated in protests, which began in March 2011, and called for Democratic reforms in the country. The violent government crackdown on the protest, and the response from armed opposition groups led to a full-fledged civil war.

Concerned that relatives still living in Syria may be targeted for retaliation, Mohammed requested that we change his family’s surname for this story.

“I feel like the American people are very friendly,” he said, saying the harsh rhetoric of Trump towards Muslims has not translated into discrimination or racism, in his experience. “I feel like I’m home.”

However, Mohammed added that one of his Arab friends in Texas has faced some hostility from neighbors.

Before the unrest began, Mohammed said he and his family were living a comfortable, peaceful life in a town near Damascus. The Mohammed family — Osama and his wife Falak, 37, son Amr, 8, and daughter Yusra, 6 — had a family farm and a small business selling clothing. Mohammed had a job at the country’s main airport. 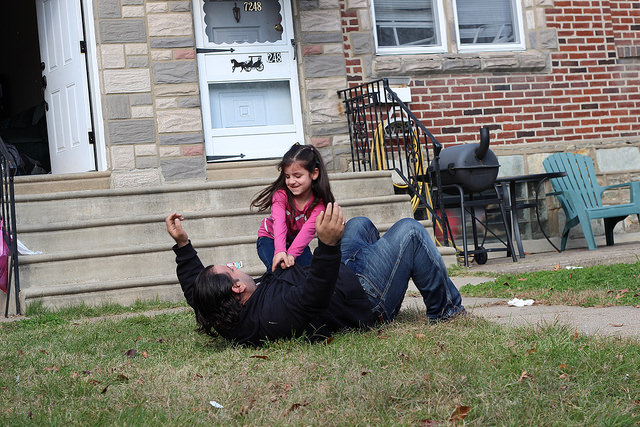 Osama Mohammed and his daughter, Yusra, play on the front lawn of their Northeast Philadelphia home. The family arrived in the United States as refugees earlier this year after fleeing their home in a Damascus suburb. Photo by Razi Syed.

“But we were terrified,” Mohammed said. “With no reason, the government could come to your home and pick you up.”

“Under the Assad family, the father and the son, it’s the same,” Mohammed said, referring to the family that has had dictatorial control over the country for the past 46 years. “You cannot criticize the government; we were oppressed.”

After the Arab Spring broke out and protests overthrew leaders in Tunisia and Egypt, Mohammed believed it was time for the Syrians to demand the end of the Assad regime. Mohammed felt he had to join his countrymen.

“I felt like we were living like an animal,” Mohammed said. “(The government) tells you what to do, and you do. You cannot cross the line.”

Trump has stoked concerns that arriving refugees may commit terrorism, by calling them a “Trojan horse” in his campaign speeches and the presidential debates. The businessman has called for Syrian refugees to undergo “extreme vetting” before they are admitted into the country.

Mac McEachin, a national security policy associate at the New York City-based International Refugee Assistance Program, which helps refugees navigate the process to get resettled, said the fears of a terrorist attack committed by Syrian refugees trumpeted by the Republican candidate are overblown.

“When I hear ‘extreme vetting,’ it means the process we already have,” McEachin said, referring to the roughly 18- to 24-month vetting process that refugees undergo.

The process includes the collection of biometric data, the involvement of the National Counterterrorism Center, the FBI’s Terrorist Screening Center, and the departments of State, Defense and Homeland Security.

“The process that both refugees and special immigrant visa applicants go through is extremely lengthy,” McEachin said. “It’s very selective — I think only 1 percent of refugees, period, get selected for resettlement in any country.”

When a refugee applies for resettlement in another country, the refugee must submit to a series of interviews, collect documents to corroborate their stories and give biometric data that can be queried into databases of suspected terrorists

McEachin said that the fears of Trump and others in the Republican party who have called for the intake of refugees to be halted due to the national security threat didn’t realize how stringent the screening process for refugees is.

He also pointed out that the 9/11 attacks were carried out by people who arrived in the country with tourist visas.

There have been 156 refugees from Syria who settled in Philadelphia from October 2015 to August 2016, said Rachel Kostelac, deputy press secretary for the Pennsylvania Department of Human Services.

From May to November 2012, Mohammed said he spent time in two jails while being regularly interrogated and experienced torture, which included beatings with batons and cables.

As the Mohammeds waited in Egypt for the process to take its course, they watched the political climate in the United States with helplessness as to what would happen in response to the November 2015 attacks in Paris, which were carried out by European Union citizens who had fought in Syria and arrived in France among the flow of refugees.

Trump immediately seized on the attacks and made them a major part of his pitch that Clinton and Obama weren’t taking the safety of American citizens seriously.

“We have no idea who these people are, we are the worst at paperwork,” Trump said in an interview on CNBC days after the terrorist attacks.

At the time of the attacks, Mohammed had been accepted to resettle in the United States and was in the final stage of the process.

“I was afraid that they would cancel my application,” he said. Mohammed feared there would be a freeze or slowing down of refugee resettlement.

The Mohammeds arrived in Philadelphia in March 2016, after completing several weeks of classes on American culture, which are required as part of the resettlement process.

Mohammed said Clinton was reasonable in saying there needs to be many precautions in light of the terror attacks in Europe.

“This is a legitimate concern,” he said. “They have to make more strict. But it’s good that she says we have no problems with anyone here — Muslim, Mexican — everyone is welcome.

“But Obama — very, very big liar,” Mohammed said, disappointed that the American president failed to honor what Mohammed felt was a pledge for the United States to more aggressively intervene in the Syrian conflict if the “red line” of chemical weapons use was crossed. “Obama is the biggest liar in the history of the United States.

“Guess what? We are in America, not in Syria,” Mohammed said, laughing. “I can say anything here.”