Philly's Black Muslims struggle on many fronts in this election cycle

On any given day in Philadelphia you can see Black women in hijabs or full burqas and Black men in taqiyahs with long beards. Walking down the streets from Center City to Germantown to North Philadelphia, you see mosques opposite churches, and Black-owned Muslim bakeries, cafes and barbershops.

In Philadelphia, Black Muslims are a large part of the community and account for about 150,000 members of the population. They are 85 percent of the Muslim population in the fifth largest city in America. And for this election cycle, they have been under attacks as Muslims and African Americans.

Both candidates have been documented connecting African Americans and Muslims to some form of a derogatory, which makes this block of voters, in a important swing state feel uninspired.

“I don’t care for either candidate,” said Sharon Muhammad, co-owner of Sister Muhammad’s Kitchen on Germantown Avenue in Nicetown. Muhammad identifies herself as a Muslim in the Nation of Islam underneath the leadership of the Honorable Minister Louis Farrakhan.

“I think that Donald Trump has a lot of growing to do,” she said after she finished cooking up a big order of everything from bean pies to fried fish to macaroni and cheese. “I’m looking at the representation of our country and I just don’t think that he’s a good representation. As far as Hillary, I don’t really back her because it was her husband who implemented the prison sentences for the younger males and I don’t think that she’s real honest.”

In a 1996 speech at Keene State University, Hillary called gangs “super predators,” which many have interrupted to mean African Americans. During the presidential debates, Trump has repeatedly implied that African Americans live in poverty and in inner cities and stated that he wanted to bring back stop-and-frisk. Trump has also proposed bans on Muslims coming into the country and often references the phrase “Islamic radical terrorism.”

Muhammad has decided not to vote in this election.

“On a wide majority, maybe it would count, but I don’t believe it will come down to the wire where my one vote will make a difference,” she said dressed in a black hijab. “I think that the president is already selected and that who’s going to win is already going to win.”

But for CEO and founder of consulting firm Evolve Solutions, Salima Suswell, 37, the rhetoric is not so easy to ignore.

“It’s disheartening to say the least,” she said.

Born into the religion, Suswell finds it difficult to swallow what is being said about her faith along with the climate surrounding the shooting of African Americans.

“I’ve always had pride in my belief system and in my faith and to hear people say so many negative things about a religion that I find to be peaceful and beautiful is difficult,” she said. “There’s so many things that are being said in this election and proposals to ban Muslims from the United States. Then we also have the issue of the wanton murder of unarmed Black males in the African American community by police officers. So you have issues of social justice but also issues of Islamophobia and it’s difficult being born and raised as a Muslim.”

But for Imam Muhammad Abdul-Aleem, Imam being a religious leader in a Muslim society, the rhetoric being used in the election is a blessing to the Muslim people because it has woken them up to the reality of America.

“If you’re not at the table, you’re on the menu,” he said, over his toast and orange juice at iMunch Café, a popular Black-owned Muslim café in North Philadelphia. “We got to learn to be at the table pushing our agenda otherwise somebody else is going to be dividing us up.” 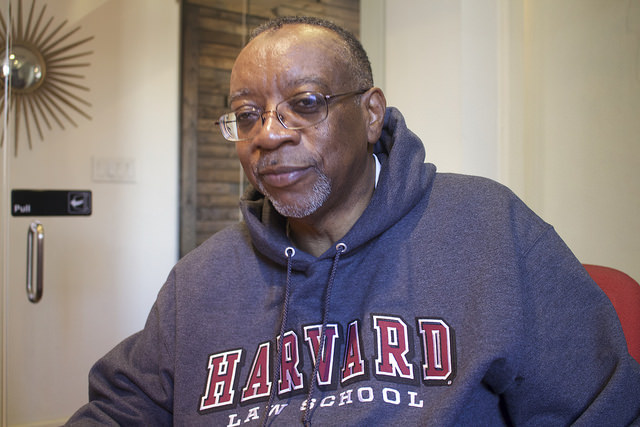 Imam Muhammad Abdul-Aleem having breakfast at Imunch Cafe in north Philadelphia. Abdul-Aleem says that the rhetoric that has been used to describe Muslims has woken them up to the realities of America and that they need to start pushing their own agenda to be included. By Brelaun Douglas

Suswell also notes that there is a difference between being an African American Muslim and an Arab American/ South Asian Muslim.

This is a difference that Aliya Z. Khabir, 37, wishes was addressed more.

“There is a divide between Black Muslims and immigrant and first, second and third generations of Muslims that come from Arab countries and Southeast Asian countries,” she said. She wore a flowered purple hijab with a purple outfit to match. It was clear the Muslim belief in modesty was important to her. “Those immigrant communities weren’t fighting for anything unjust until it affected them as Muslims. What bothered me is that these Southeast Asian communities were completely ignoring that there African American brothers and sisters were being oppressed since our existence here. It was only important to them to reach out to us when they felt the backlash coming onto their communities.”

Born and raised in Philadelphia as a Black Muslim, Khabir is a PR spokesman of sorts for the African American Muslim community

“I’m the person people come to when there’s a problem or there needs to be a statement of some kind or something needs to be promoted or marketed for the Muslim community,” she said. “I’m the go to.”

For Khabir, Hilary Clinton is her by default voting choice.

“I find that in conversations with peers and colleagues that people have this very romantic thought about voting,” she said. “That there’s going to be 12 points that I’m passionate about and I’m going to find a candidate that matches all 12 points and that’s just realistically impossible. With Hillary, the other candidate is a fascist, a sexist, a racist, a bigot and that affects my quality of life, my livelihood, my right to exist and my right to feel safe. Hillary on the other hand does not have that kind of affect on my life.”

But for Suswell, Hillary Clinton is the choice because her plan is less divisive, while Abdul-Aleem believes Hillary is the most qualified candidate.

“To all right-minded people, whether they’re Muslims, Christians, Jews or have no religion at all this is a time where history is moving forward and I think that a vote for Donald Trump and Republican-minded people is a vote for going back to the past,” Abdul-Aleem said. “We’re never going back.”