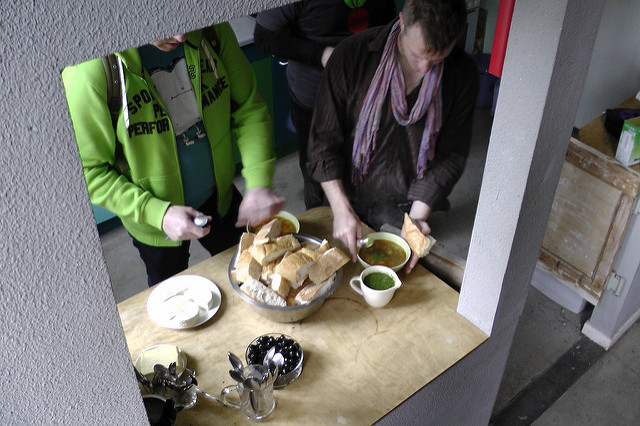 At the end of the summer, Stephen Robinson moved to Scranton, PA, with his pregnant girlfriend to be closer to her family. At first, Robinson, a trained computer technician, took a series of part-time, minimum wage temp jobs. Recently, though, he started working the assembly line at Made Right Meats, a local meat packaging plant. Even though it is a full-time position that pays $10.50 an hour, it isn’t enough to support his family. As a result, Robinson is part of the 12- to 14-percent of Scrantonians who are “food insecure.”

Neither Hillary Clinton nor Donald Trump has offered a plan to help the millions of Americans who can’t afford or access a sufficient amount of nutritious and affordable food on a daily basis. And at least in Scranton, those like Robinson and his girlfriend, who is pregnant with their second child, have returned the favor by largely tuning them out, as well.

Robinson says he will vote and he suspects his girlfriend will too, although he hasn’t discussed it with her. But he is “still not really sure who [his vote] will be for” because his situation doesn’t seem to be a concern of either candidate, he says.

Those in Robinson’s position fall between the cracks. They’re making too much to qualify for SNAP benefits but don’t earn enough to become self-sufficient. And with a lack of jobs paying a “living wage” in Scranton, there appears no help on the horizon.

Even in his new full-time job at Made Right Meats, Robinson will only be earning $21,000 before tax annually to support his soon-to-be family of four. After the government takes their fifteen-percent cut, Robinson is left with less than $1,500 to cover food, transport, rent, healthcare, bills each month.

The University of Scranton’s 2016 Living Wage Report found that two-parent, two-child families with a single breadwinner needed to earn $44,056 annually before tax to have economic security.

Earning well below half of the living wage threshold, Robinson, like others in his situation, has turned to community-run services to bridge the gap. Friends of the Poor Food Pantry in Scranton serves over 1000 families each month, with newcomers joining daily. Sister Ann Walsh, who runs the place, says that they are seeing more and more reliance on their services from employed individuals and families.

“One thing I’ve learned,” says Robinson, is that “the people that are working are struggling more” than those who qualify for SNAP benefits– essentially government food stamps. Each time Robinson has applied for SNAP his income has been too high but once you’re in, he explains, it’s “lax” and you’re in a better position to feed your family then you were when you were working.

Candace Tripp, who is performing her community service at the Friends of the Poor Food Pantry, has also found that to be the case. Tripp’s husband works in a factory that builds parts for modular homes and earns $8-an-hour, a rate she calls “a good wage.” But the couple and their two kids still rely on government assistance, through the SNAP program, also resorting to food banks to fill their fridge. Not only is it hard to find a decent job as a woman, Tripp says, but in Scranton “it wouldn’t even be worth it for me to work.” By the time she factors in the cost of transport or childcare, she is better off collecting government benefits.

Employment has been an issue in Scranton for a long time. It’s the type of city the country has heard Donald Trump talk about at length this year. These are areas where manufacturing jobs that paid $25- to $35-an-hour have disintegrated and shifted the majority of the population into the service sector, which pays $9-an-hour at best, explains Doug Long.

Long, a Manager at the Greater Berks Food Bank in Reading, describes cities like Reading and Scranton as “limping through the 2000s”, following the shutdown of two big factories early in the decade. The 2007 recession only compounded the issue creating dramatic increases in poverty and hunger in suburban and rural areas in Northeastern Pennsylvania.

The lack of employment opportunities that pay a living wage, as opposed to Pennsylvania’s $7.25-an-hour minimum wage, is recognized as one of the largest drivers of food insecurity in the region. But as neither Trump nor Clinton have addressed food insecurity, they have spoken at length about returning jobs to middle America.

Despite this, visitors of Friends of the Poor Food Pantry appeared disengaged in the political election. Kathy Fisher of the Hunger Coalition says that “the issues of low income people are left out of the election and policy debates.” Fisher explains that “many people are left out” and they “probably feel that it doesn’t matter who I vote for.” For those facing food insecurity, “whether we are under a Democrat or Republican president,” she says, “life doesn’t change much.”

Robinson agrees and doesn’t think either candidate will bring back jobs. He thinks that Trump, despite his talk about bringing back manufacturing, is really only out for himself and “if he does create jobs, [they] won’t be good jobs.” Robinson thinks they would be jobs that “basically just let people survive and not really get anywhere.” With Clinton, he does see her improving education so that “people are better prepared for jobs” but as far as creating jobs, “I don’t see that happening.”

The hope that was omnipresent across America during Obama’s first campaign is hard to find amongst those struggling in Scranton. Dr. Joanne Christaldi, who has studied the food insecure population in Scranton, says the sentiment she often hears is that “the government has all this money and they don’t want to give it to us.” It’s ingrained because, she says, “you’re into a third generation of people who have lived that life” of struggling to make ends meet.

Election aside, Robinson believes it’s up to him to make things better for his family. “Things will get better,” he says before concluding: “winter comes before spring.”