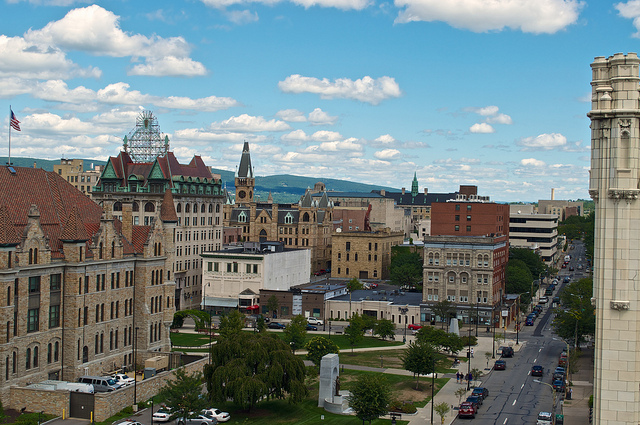 As of late, it’s been a buyer’s real estate market in Scranton, Pennsylvania. But it hasn’t always been that way. In 1960, the Electric City was buzzing with more than 140,000 residents. However, as the decades passed, technology and globalization sucked away a lion’s share of the jobs and the residents. Today there are less than 80,000 people left. But as the tens of thousands of locals fled with their valuables and heirlooms, there was one thing they couldn’t take with them — their homes.

Today there are so many vacant homes in Scranton that if you have enough money to spend, the options are plentiful, the prices are low, and the market is great. But with a weak economy and scarce jobs, the dream of buying a house remains hopelessly out of reach for many residents.

This pairing of unaffordable housing and scarce jobs bears heavily on locals’ minds ahead of the 2016 presidential election.

“We have been stagnant here in Lackawanna County,” said Gary Pelucacci a resident who serves as the Executive Director of the Scranton Housing Authority. “I think that if we had more economic opportunity that would have an impact on everything.”

Pelucacci’s sentiments are echoed across town. From bars in the city square to locals’ kitchen tables, people ask when the economic decline will finally end and when will growth pick back up.

At a Scranton barbershop, South Side Cuts and Fades, the jobs discussion turns to Donald Trump and Hillary Clinton’s contentious presidential debates.

“Illegal immigrants are coming in, taking advantage of the system, and they are taking our jobs,” said Trump supporter Pat Calvey, one of the barbers at the shop, his statement echoing Trump’s anti-immigration stance that helped launch the GOP candidate to the fore of the Republican Party earlier this year.

Calvey and two other barbers on duty, Stephen Draper and Amar Bell, argued over the validity of the statement. Bell disagreed with Calvey and said the real reason for economic stagnation was political and corporate greed. Draper countered with the prevalence of crime and the need for personal responsibility.

After a few long pauses, the debate simmered down. “Both of them ain’t shit,” Bell said of the candidates. The other two men nodded in agreement.

Later, Marco Rojas, one of the patrons decided join the conversation. Rojas, a Mexican-American who lived a few miles away in Poconos, legally immigrated to the United States in 1993. He said he had paid taxes for more than 20 years, and doesn’t like it when people accuse him of stealing jobs.

“You come from the greatest country in the world,” said Rojas “You shouldn’t be afraid of somebody taking your place.”

But this fear Rojas referenced is too deeply embedded to be quickly dismissed. It is rooted in years of loss and displacement, and it is fueled by residents’ intimate and prolonged experience with tough economic times.

According to the US Census Bureau, Scranton has a poverty rate of 22%. “We have a lot of families on the lower side of the economic spectrum where they can’t afford a $600 a month rent,” said Gary Pelucacci. He later added that without living wages, these residents have few means of advancing their lot.

“They are just families trying to make ends meet, and they just can’t afford it,” Pelucacci said.  “They can only stretch their paychecks so far.”

This affordability crunch isn’t unique to Scranton. From coast to coast Americans are struggling to pay for their homes. According to a 2013 study by The Urban Institute, there are 19 million families who can’t consistently cover their housing cost.

Of these, less than 5 million qualify for housing assistance; those who don’t get support “face serious challenges ranging from severe cost burdens to overcrowding to homelessness,” the researchers wrote.

When Scrantonians are struggling with their homes, one of the first places they turn to for help is the Scranton Housing Authority. There, many hope to receive a unit in a public housing building or a Section 8 voucher to help them pay their rent in privately owned buildings. Unfortunately, there isn’t enough aid to go around, and for those in need, the wait to receive assistance can be stunningly long.

The city currently has 350 people on its public housing waiting list and a few hundred more on the waiting list for Section 8, Pelucacci said. “When we open [the list] up, we may get 500 people to apply within two weeks, and sometimes we can only put on 10 to 15 people.”

Without adequate funds for government assisted housing, other residents turn to nonprofits like Scranton’s Habitat for Humanity for help. But much like the Housing Authority, housing needs far surpasses the supply available.

The local chapter is modest in size and resource. “We aren’t really serving that many people, but the need is huge,” said Paul Philpott, the executive director of Scranton’s Habitat for Humanity affiliate. “Often times we will get 80 applications when we only have 20 homes available.”

Officials from both Habitat and the Housing Authority say that Scranton’s weak economy is at least partially to blame for the rough housing market.

Philpott said that if the area had more corporate headquarters or thriving business Habitat would receive more donations and could house more families. Likewise, Pelucacci believes if there were more jobs, people would be able to support themselves.

But despite all the economic challenges locals face, residents still work to maintain the city’s middle-class atmosphere. The downtown square is manicured and bordered by pubs, restaurants, and bars. The Scranton Cultural Center puts on plays and musicals for residents. Triple A athletic teams entertain local sports fans. There are nearby schools and universities to provide students with a quality education.

“I think you have everything here as you would in a city our size,” Pelucacci said of Scranton, but when asked, he did think that there was missing piece — “job opportunities.”