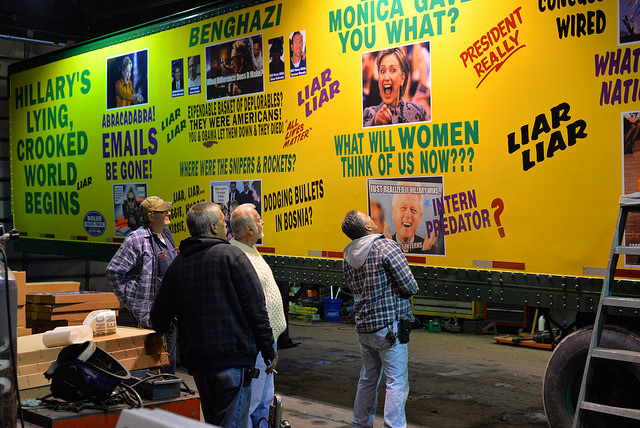 THE DEPLORABLES OF SCRANTON

It’s 5 a.m. on a Saturday morning 10 days before the election and Scranton, PA trucking tycoon Bob Bolus is in Manhattan, coordinating what feels like a covert operation: helping to navigate two 18-wheelers covered with pro-Trump slogans to the Fox News headquarters on Sixth Avenue. The 74-year-old fervent Trump supporter curses profusely from the driver’s seat of his SUV as he tails the two trucks, which keep getting separated by Manhattan’s grid system.

“I need to get my head examined for doing this,” Bolus says after running through a red light.

But he shows no signs of stopping. Bolus has taken the trucks to the Big Apple from Pennsylvania’s rustbelt three times already. On the first trip, “Ivanka saw the truck at Trump Tower and sent [a photo] to Donald, who tweeted it. So that was worth something, know what I mean?”

Starting in March, Bolus and his team of volunteers have been crisscrossing the Eastern seaboard with the Trump 18-wheelers several times a week. In an impressive act of what some may call political trolling, they’ve parked the trucks outside of rallies for Hillary Clinton, Ted Cruz and even a Gloria Steinem meetup.

“Not bashful” is one way of putting it. While the trucks’ all-caps font and poorly-cropped photos give them the look of a middle school class project, there’s no denying their raw visual power. On the way to New York this Halloween weekend, the first truck touts THE DONALD FOR PRESIDENT along with slogans practically screaming BUILD THE WALL and KEEP MEXICAN DOPE IN MEXICO.

Bolus is especially proud, though, of the second rig, which is his latest creation – “the Hillary truck.” It’s painted yellow — the color of cowards, he said — and is plastered with anti-Hillary Clinton attacks such as HILLARY FOR PRISON. The night before the New York City trip, Bolus added yet another that reads SHE’S DEGRADING ALL WOMEN. The decal, Bob said, was a reaction to the media making Trump’s treatment of women a central campaign issue.

“[Hillary] allowed [Bill Clinton] to go out and commit adultery and she sanctioned it,” Bolus said. “If you support Hillary, don’t bitch when your husband says I got laid last night.”

Bolus isn’t just bringing his message to New Yorkers. In a stab at maximum publicity, he is also trying to get the trucks to make an unsanctioned appearance on Fox & Friends, which starts at 6 a.m. and has a live broadcast with city streets as a backdrop.

The operation stumbles at first. Fox News security calls the police, who chase Bolus away from parking the Trump trucks by the Fox News building without permission and give him a $150 ticket for double-parking.

“That’s what you get for trying to do something for this country,” Bolus said. “F***ing rent-a-cop idiots.”

Bolus has had run-ins with police before. He was charged with purchasing stolen vehicles in 1991 and insurance fraud in 2012, with the first case leaving him a convicted felon and the second in jail. Bolus, who proclaims his innocence, said the episodes have left him believing the “system” — whether in Washington, D.C. or Lackawanna County — is deeply corrupt.

Bolus promises the NYPD officers they’ll leave, but he has a trick up his sleeve. He orders the trucks to drive around the Fox News building at a snail’s pace so they reappear on the live broadcast every few minutes.

It works. Both freighters appear on Fox & Friends – right at host Tucker Carlson’s nose level – and the Trump supporters ardent enough to be watching Fox on an early Saturday morning tweet out images of the broadcast with glee. 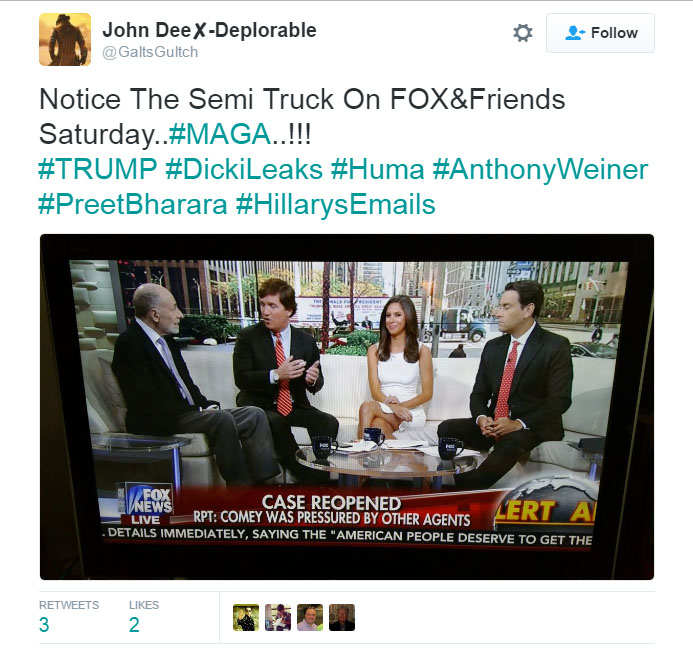 After about 20 runs around the building, the cops realize what he’s doing and tell Bolus to scram. He finally departs for Trump Tower, where he double-parks his two trailers back-to-back in front of the building’s gaudy entrance. The police at the tower are more amenable than the ones at Fox News and onlookers gather by the dozens to take pictures. Few seem upset by the trucks, even in famously liberal New York, which seem so out-of-place. 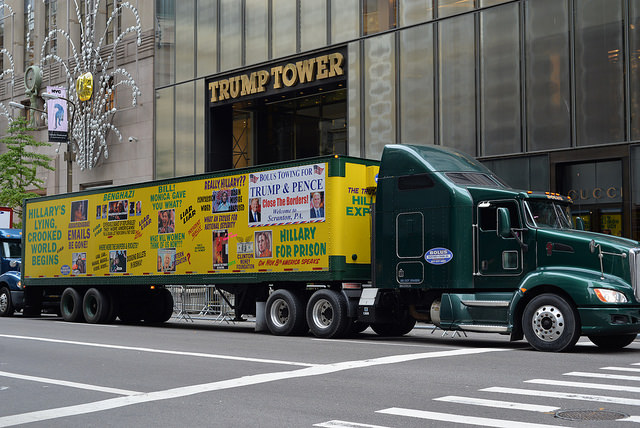 The Hillary truck in front of Trump Tower. Photo by Charles Rollet

Betsy Green, the head of a local Women for Trump group and a fellow traveler in the Trump convoy, is in awe of the truck in front of Trump Tower. “That’s a beautiful thing,” she says.

Bolus, too, is pleased: he can’t stop himself from pointing out almost every single person taking a picture or a selfie of the trucks. Coupled with the Fox News broadcast, the exposure must be massive, he surmises.

“Think of how many millions of people saw this,” he says. By 9:30 a.m. the Trump Tower police tell Bolus to leave, and this time, he complies. Scranton awaits.

On the way back I ride in the anti-Hillary rig with Tom Mazurick, a laconic, chain-smoking employee of Bolus’ who takes part in the convoys. As the 550-horsepower Kenworth roars down the highway, I ask Mazurick who he’s voting for on Nov. 8.

No surprise: it’s Trump, it turns out. 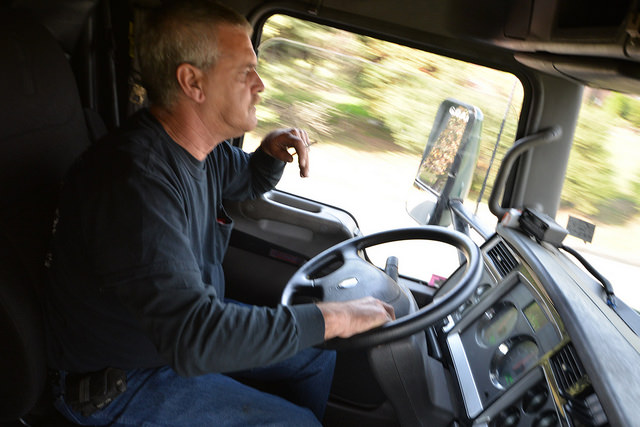 Tom Mazurick drives the “Hillary Truck” back to Scranton after a successful trip to New York. Photo: Charles Rollet

The truck fleet, however, is only the most visible weapon in Bolus’ pro-Trump arsenal. Entirely independent from the official Trump campaign and the Republican National Committee, Bolus has built an impressive get-out-the-vote operation in Scranton for Trump based in a church gym he owns. There, a motley cast of volunteers pound the pavement for The Donald, putting up signs and registering voters in the area.

Scis is sitting in front of a single large cutout of Trump, Ronald Reagan, and John Wayne standing together and is surrounded by hundreds of Trump campaign signs. Like many others, Scis, has embraced the epithet Hillary Clinton used to describe Trump supporters in September with delight. 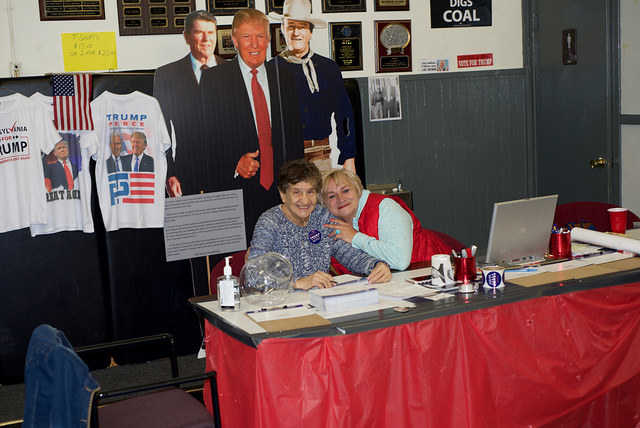 But the “Deplorable Volunteer Center” has a fraught relationship with the official Trump campaign office in Clarks Summit, a town a few miles north of Scranton. Bolus and his volunteers accuse the Trump campaign of being overly bureaucratic and setting up in a small, distant town instead of Scranton itself.

Effectively, the strong anti-establishment sentiment among Bolus and other Trump supporters has trickled down to Trump’s own campaign.

“I am Donald Trump’s ground game,” Bolus says. “People were going to Clarks Summit and getting very frustrated. They weren’t really successful at what they were doing, they weren’t aggressive – they just wanted to sit back.”

Russ Sullivan, a freshman accounting major at the University of Scranton and Bolus volunteer, agrees.

“They’re taking credit for how many people we register and how many signs we’re putting up,” he says.

What’s indisputable is that Bolus’ outfit has become a community center of sorts for Scranton’s Trumpers. That includes Albert Ventura, a 93-year-old WW2 vet who is registering to vote for the first time in his life.

“We’re in a hell of a mess, and if she gets in, it can’t get any better,” he tells me. “The rich are getting richer and the poor are getting poorer. And when I go to the store I feel like a foreigner – they’re all Chinese or Puerto Rican. My God, I gotta learn Mexican!”

A certain level of popular support for Trump in the Scranton area is unsurprising. Scranton, which was built on the coal and steel industry, has seen its population decline by half since 1930 to around 75,000 and has been wreaked by the globalization that Trump decries.

Although Scranton is a traditional working class Democrat stronghold, many have switched from Democrat to Republican. According to the Scranton Times-Tribune, more than 2,500 Democrats have made the switch in Lackawanna County in the months leading up to the election, compared to less than 1,000 Republicans.

On Saturday night, about three dozen people come to Bolus’ Trump office for a Halloween party complete with an “RIP Crooked Hillary” cake in the shape of a coffin and a band playing the smash hit “Let’s Make America Great Again.” Most sit down to watch Fox News in rapt attention as Donald Trump touted the FBI’s latest investigation into Hillary’s emails. 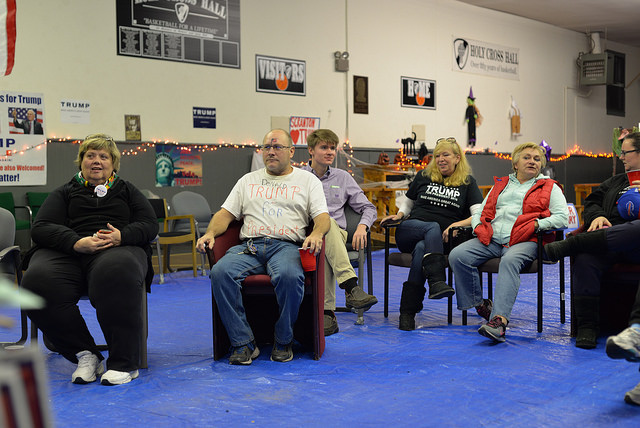 Trump supporters watch Fox News at a Halloween party in the “Deplorable Volunteer Center” in Scranton on the night of Saturday, Oct 29. Photo: Charles Rollet

All the Trump volunteers I speak with agree this is the most enthusiastic they’ve ever been about an election. For them, this campaign is about getting rid of a corrupt political class that has never served the interests of hardscrabble places like Scranton. Trump’s blusterous statements and behavior have only reinforced their perception of him as a non-politician who tells it like it really is.

“I can’t understand how anyone could vote for a criminal,” says volunteer Maria Lewis, a former Democrat. “If the media is against [Trump], that means he’s stopping the gravy train and all the special interests.”

“He’s like the saint that’s going to save the world and get rid of the corruption,” says volunteer Aida Velez, who calls herself the “Deplorable Princess.”

After observing Bolus’ efforts on behalf of Donald Trump for two days, it became increasingly clear the man wasn’t doing all this only because of his passion for Trump. Bolus has a natural ease seeking publicity and organizing a well-oiled campaign. He’s a born politician.

However, due to his criminal record, there is little chance he’ll run for elected office. That’s not for lack of trying. In 2001, Bolus ran for mayor of Scranton but was barred by the Pennsylvania Supreme Court because of his 1991 felony conviction. Bolus’ family hasn’t been free of legal troubles either. His son Brian, who Bolus says he’s disowned, pleaded guilty to federal tax evasion this January.

Bolus claims his legal saga is the product of repeated battles with local government and law enforcement, members of which he accused of overseeing various corrupt schemes in the trucking industry involving tolling fees and even drugs.

“When you do what I do and speak out against the power and corruption you get screwed,” he says. “The system is dirty and corrupt.’’

Thanks to Trump, Bolus has finally been given the opportunity to lead a political campaign. While he won’t disclose how much he’s spent on the effort, it’s clearly substantial; the Trump trucks don’t even carry freight during their runs.

“It’s my money, it’s my time,” Bolus says. “The last thing I want to see is Clinton president. I want to see her behind damn bars where she belongs.” 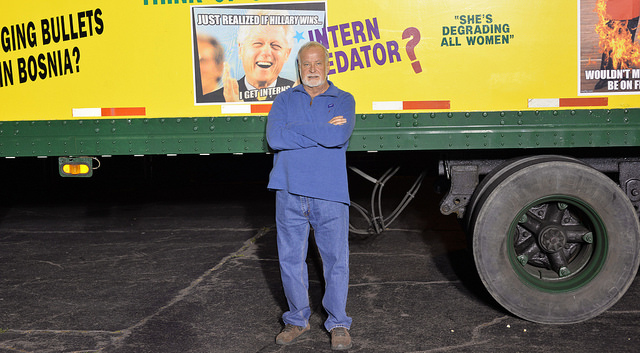 Bob Bolus stands in front of the “Hillary truck,” which was parked outside the “Deplorable Halloween” party in Scranton the night of Oct 29. Photo: Charles Rollet