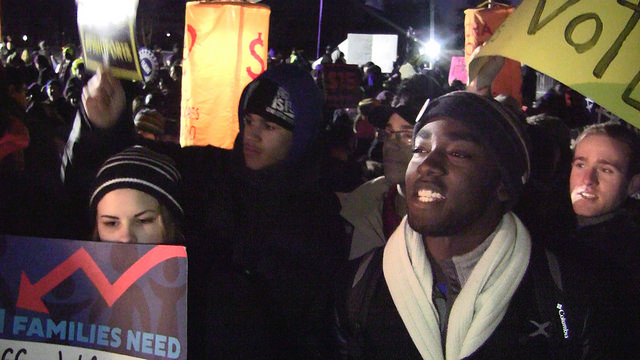 A circus of protest in front of Republican Debate

Sequestered in the free speech zone, down the hill from Saint Anselm College in Manchester,NH where the Republican debate was being hosted on Saturday, assemblies of supporters of candidates and advocates for specific issues milled about in the snow.

A group of AARP members were out in force sporting matching red wind breakers.

“In 2034, if nothing is done we will lose 25% of our social security,” said Donna Mangold an AARP member. “I was laid off 7 years ago, I depend on social security for my income at this time.”

There were also supporters of a candidate who did not attend the debate, but who was the only candidate to make an appearance in the free speech zone.

“I am a supporter of Vermin Supreme, he is on the ballot, he is not a write in,” said Sam Barrett, a supporter of Vermin Supreme, flanked by her fellow supporters, many of whom sported hats with cloth mouse antlers. “He (Supreme) is for zombie preparedness, he wants to prepare for the zombies, because you know they are going to happen, he is for giving every American a free pony, he wants to go back in time and strangle baby Hitler.” 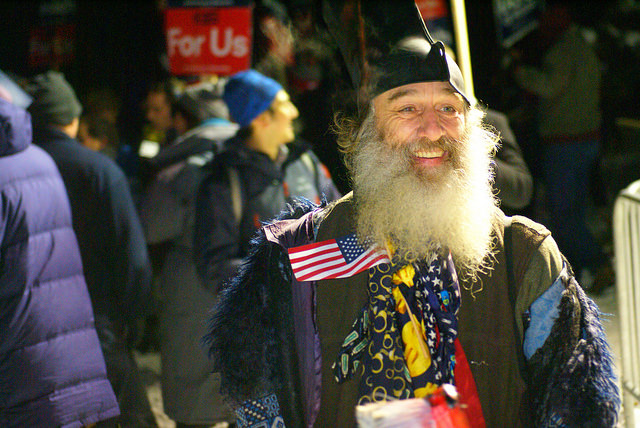 When Supreme arrived he ran back and forth in the free speech zone riling up his supporters. In spite of this motion, the boot he wore on his head remained firmly fixed in place.

But the group of protesters that outnumbered the others, were representatives of the “Fight for 15″ movement., who want the minimum wage raised to $15 an hour.

I am out hear to get a $15 minimum wage,” said Joshua Murray, a member of the 1199 SCIU Union. “Being a member of a union, I make a decent wage, and I think that that is something everyone should be entitled to.”

The group made a dramatic arrival to the debate. They walked up the street bearing signs that spanned the two lane street. The protesters had congregated earlier in the day, at a McDonalds, an employer of low wage workers, in downtown Manchester, four miles away. From there they marched to the college, chanting slogans like, “the workers united, will never be divided,” “whose streets? our streets,” and “si, se puede (yes, it is possible).”

“Everybody deserves a liveable wage, there are too many families in the United States that are living on too little to survive,” said Reed Shafer-Ray, one of the protesters out with the “Fight for 15” group. “They are having to work all day everyday. They have no time for their children, they have no time for life outside of work, and living in one of the most highly developed countries on earth.”

Flanked by Christy supporters, who were being lead by a sole figure standing in the road in the chant, “who do we want? Christy, when do we want him? now,” the Fight for 15 protesters assembled in a continuously rotating circle going up the hill, tramping the snow into slippery ice on the slope.

Although the mass of supporters of the “Fight for 15,” were not there to support any candidate, the question posed on several of their signs does beg an answer.

“The union has backed Hillary, but I, personally, am feeling the Bern,” said Murray, expressing his support for Democratic Presidential Candidate, Bernie Sanders.

Hillary Clinton has made statements of support for a $12 minimum wage, but she cited a Paul Kruger New York Times Op-ed to explain her opposition to a $15 minimum.

“Bernie Sanders, is definitely the most progressive left in the race,” said Shafer-Ray. That statement was yelled over a repeating chorus of “come get out vote” from the crowd.