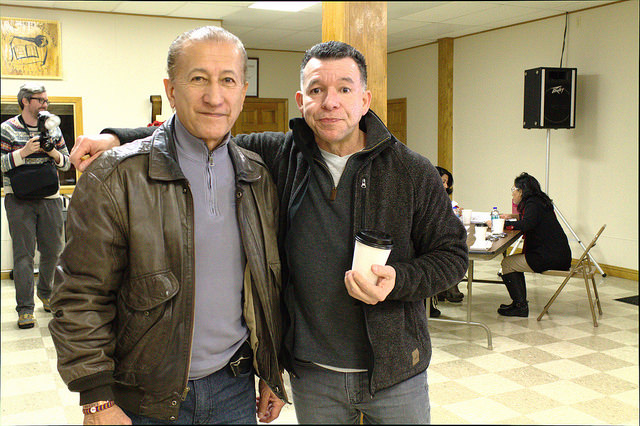 Fernando Valerian, native of Colombia, recently entered the community center in downtown Manchester, NH, and was warmly embraced by his friends, members of Manchester’s Hispanic immigrant community, all from different parts of the world. They led him to a foldout table packed with flyers and informational packets. Their headlines read ‘Vote Now NH Hispanics!’ and ‘Su Voto Es Importante!’

Valerian grabbed them all.

“A lot of people never vote,” Valerian, the owner of Two Guys for Market, which sells specialized Latino foods, said. “Politicians are so corrupt in their own countries, that people think it’s the same thing here.”

Latinos make up a majority of the state’s small immigrant population. There are roughly 22,000 Latinos, which accounts for 3.3 percent of New Hampshire’s population. They make up 2.2 percent of the electorate, and more than half of those people are eligible to vote. As a small minority, Latinos need high turn out if they want their voices to be heard. 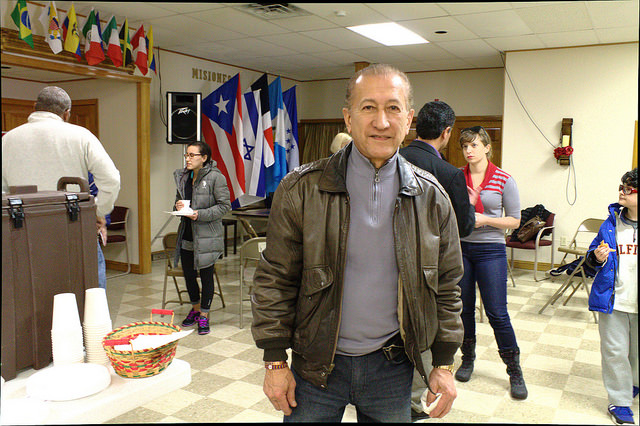 “It’s very important because, first of all, it’s a right that they have. It’s their responsibility,” said one of the Colombian community organizers, Diego Cataño.

He was working on the center’s workshop where immigrants could talk about the voting process, why it is important, where to vote, how to register, and how to choose a candidate,.

“You’ve got no voice if you don’t vote,” he said

Many of the immigrants expressed how important it is for their community to vote in the upcoming election because of all the anti-immigration rhetoric and immigration reform policies that certain presidential candidates, such as Donald Trump, have proposed. Like the deportation of millions of immigrants. 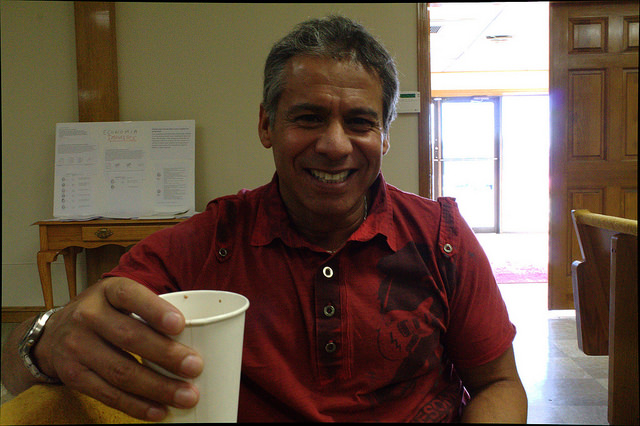 Mauricio Guildez, a Colombian immigrant in Manchester, took a break from the Latino voting workshop to talk about how immigrants really benefitted America with their hard work ethic. Photo by Alexandra Zuccaro

“If we were to deport 11 million immigrants, the whole system would collapse. Why? Who cleans every single room in every single inn/hotel in this country? Who are the core of the construction businesses? They are all immigrants. They are all illegal immigrants. We do the jobs that the white American does not want to do,” said Mauricio Guildez, another Columbian immigrant who was there to learn about the voting process. “I’m for legalizing the workers that we have.”

After grabbing some empanadas, Valerian joined his friend, Guildez, and they agreed that Donald Trump was a “clown.” He was frustrated by Trump’s perceived hatred, toward the immigrant community.

“How can people pay attention to a guy who is discriminating to Latinos, towards Muslims too?” said Valerian. “I feel bad not for him, not for me, but I feel bad for the community. That this guy says all this nonsense, all this stupidity against people and still he has a big following. I can’t believe that.”

In a state where there are not a lot of minorities, many immigrants said that it was easy to feel alone and that a support system is important. One of the community volunteers, Mariela Rice, said that she feels a deep connection with her immigrant friends, because they all shared the dream of a better life.

“We all do different kind of jobs, but we all relate to different countries. So we love each other and do a lot of community groups,” said Rice, originally from Chile. “I support a lot of people that come here to have a better life and a better life for their kids. They work hard. They work every day.”

After the voting workshop ended, they ate the last few empanadas, drank some hot chocolate, and swapped stories with each other into the late afternoon.

Meanwhile, in the heart of Manchester’s Latino community the Latino Styles barber shop was still hopping. The waiting room was crowded with men and boys, some laughing, some dancing to the booming Rumba music bursting through the speakers.

In the corner of the shop, Tomas Barrera finished the last touches on his client before he cleaned up a few empty Heineken bottles and slouched down into his chair. Barrera is the owner of the first Spanish barber shop in New Hampshire. He is also an immigrant from the Dominican Republic, who moved to the states with his mother in 1983. 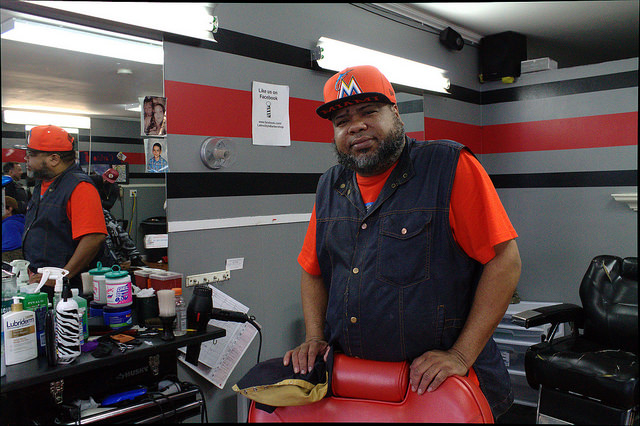 Tomas Barrera, owner of Latino Styles, is heavily invested in the issues of immigration reform since several of his clients are undocumented immigrants. Photo by Alexandra Zuccaro

As a successful business owner, Barrera took advantage of the opportunities he was given.

“I’m not going to say that everybody is a hard worker, but most of us, we’re hard workers,” he said.

Unfortunately, Barrera explained that this isn’t the case for everyone in the Hispanic immigrant community.

“I have a lot of friends and even family members who aren’t good, and they get deported,” he said.

Barrera admitted that many of his clients are undocumented immigrants, so immigration reform issues directly affect his work.

“When I used to work in Lawrence, I lost like 12 customers, or maybe even a little bit more, because they did a raid and then deported all these people,” said Barrera. “If you come to this country, and you don’t have a chance, then what are you going to do? You’re not going to work legally. You’re going to get into bad things. So I think if there was a better program or process, then people wouldn’t do that stuff.”

Barrera was beyond thankful that his mother brought him here at a young age, because he knows how difficult it can be to just survive in third world countries. He sympathized with those that can’t get here legally. Because of this, Barrera said he identified as a Democrat, and planned on voting for Hillary Clinton. He thought that most of the Republican’s immigration reform platforms would ultimately hurt his business.