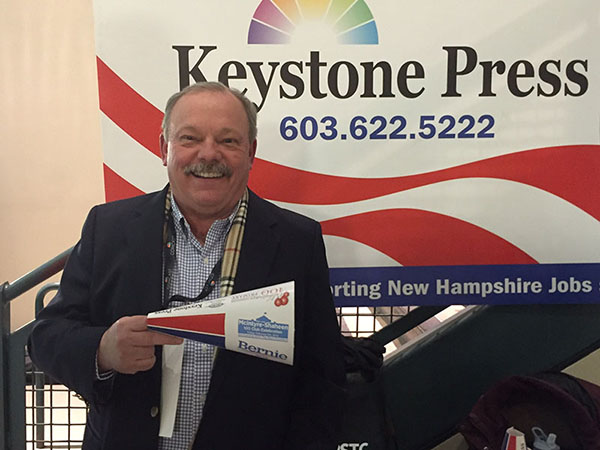 When Dan Biron acquired Keystone Press, a century-old printing business in Manchester, NH, he knew when the primary comes around he would be doing business with only one party.

That’s because Keystone is a union shop, and that means all its workers are members of the union, in this case the Graphic Communications Conference/International Brotherhood of Teamsters. Historically, labor unions have aligned with the Democratic Party, especially so in New Hampshire, where almost 10% of the workforce is unionized.

During elections, a peculiar symbiosis occurs. Democratic candidates insist on working with local vendors that are unionized. This boosts the local economy and attracts union endorsements. As a result, Biron claims he is the exclusive printer in New Hampshire to both Democratic campaigns for all signs, brochures, mailers, post cards and door hangers. Campaign finance records as of Dec 31, 2015, available on FEC.gov, show a payment to Keystone Press by the Bernie Sanders campaign.

“It was a part of the motivation for buying the business in the first place,” said Biron, who spent 30 years in the footwear industry before buying Keystone in 2012.

Biron said he bought the business for $1 million and has sunk another half a million in to upgrade machinery for better quality printing and faster turnaround. His investment is beginning to pay off. In the run up to the New Hampshire primary Biron has seen a 25% boost in business and expects it to pick up even more as the general election approaches.

Would he ever do business with Republicans?

“It’s not that I would willingly turn business away,” Biron said,” but they usually don’t come to us.”