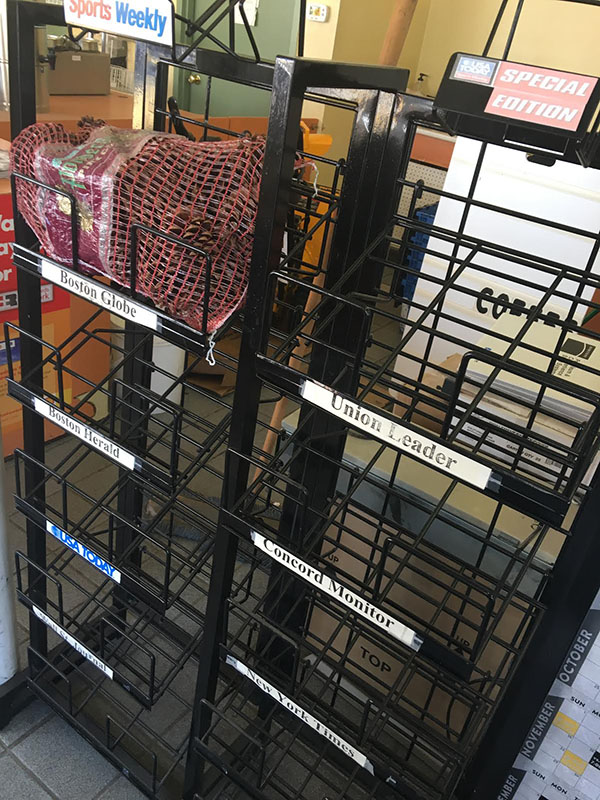 New Hampshire’s Primary season should be good for business.

For months leading up to the vote, this tiny upside-down-partly-eaten-pizza-shaped state of 1.3 million mostly white people is the center of the political universe. It attracts politicos of all stripes and media of all sizes. Call it the Political Stimulus Act, a failsafe generator of local economic activity. It means hotels are booked and restaurants and bars buzzing. It means more pickups for Uber drivers accompanied by higher fares as “surge pricing” kicks in and stays on.

But one local industry not reaping the benefits is newspapers. Despite intense interest in the spectacle of a presidential election – Republican debates on Fox News have attracted record ratings – circulation for New Hampshire’s most iconic newspaper, the New Hampshire Union Leader, continues to fall. A decade ago, circulation was 59,232 on weekdays and 79,326 on Sunday. In 2010, daily circulation was 49,332 and 65,767 on weekends. Nowadays, according to the Alliance for Audited Media, average weekday circulation is 35,831 and 47,803 on Sunday. Not even Donald Trump, who has driven up television ratings, has helped newspapers.

The signs of this reader decay are all around. In Afshin Convenient Store across the street from the Verizon Wireless Arena, where Secretary Hillary Clinton and Senator Bernie Sanders spoke Friday night, three copies of the New Hampshire Union Leader sat forlornly on three almost-empty newspapers racks.

The newspapers hadn’t sold out. They had only bought a few in the first place.

According to Abel Alhaouat, a part-time cashier, what would be the point to buy more? The store sells one or two copies a day, and only one copy of Union Leader came off the rack the morning after the big event across the street. Klemms Mobil, another store located in downtown Manchester, sells roughly 30 newspapers a day, mostly Boston Globes. The store sells far more Tic-Tacs, lottery tickets, and Slim Jims.

On the content business side, local newspapers and magazines might not have sold more in the days and weeks leading up to Tuesday’s primary, but they have profited a bit from increased advertising.

New Hampshire Magazine, a monthly lifestyle publication, ran a full-page political ad from the Bernie Sanders campaign in its February issue. The rate for a one-time run is $4,000, said Rick Broussard, the magazine’s editor.

Brousard’s magazine “almost never” ran “political ads in the past,” he said. While the magazine doesn’t spurn them, their benefit is limited. After the primary the number of campaign ads will trend back to zero. They are, essentially, a one-off.

All of this once-every-four-years statewide politicking has not boosted readership either. Last month, the magazine published two feature-length stories on the primary, which it touted on the cover.

“Although I think they were popular stories, no telling if they sold extra copies on the newsstand,” Broussard said.

Karen Ladd, publisher and editor of The News and Sentinel, said her home mailbox is “stuffed every day with campaign flyers” yet she has not seen any uptick in advertising. Her paper, with a circulation of 4,300, carried a couple of inserts from the Bush campaign. Carly Fiorina supporters paid for a half-page ad. And the Trump campaign ran a few small ads to announce meetings.

“That’s about it,” Ladd said, “and I doubt we’ll get anything more from the general election.”

It is not just because most people prefer to consume news on mobile devices than old and moldy print newspapers. Laurie Hironaka, vice president at Topix, a website that aggregates news from volunteers, sees the same dynamic playing out with digital information, too.

“We used to see a huge uptick in traffic around elections but it’s a smaller percentage of our traffic now,” Hironaka said. “I assume the situation of newspapers is the same. Local newspapers don’t even want to cover political events.”

Readers are awash in information they can access any time, any place, and in any form with their smartphones.

Besides, said Alhaouat, the Afshin Convenient Store cashier who is earning his MBA at the University of South New Hampshire. “You do know that the newspaper is a dying business, right?”