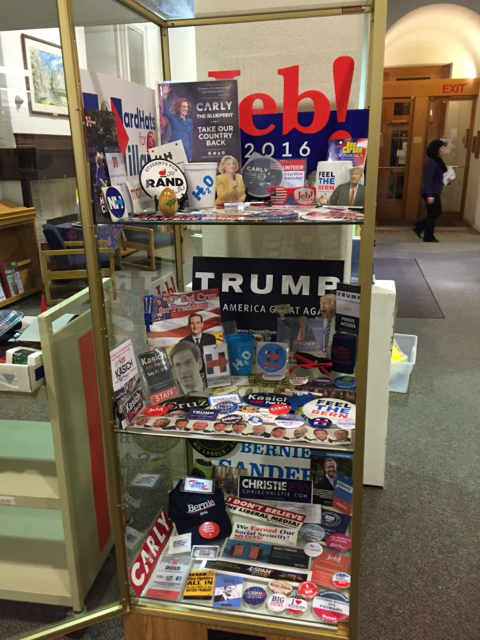 For the past seven months Michael Dunham has traveled during every spare weekend to New Hampshire from Holliston, Mass.

But Dunham, 59, is not a volunteer, staffer, or journalist. He is a political memorabilia collector who jumped on the campaign trail in June, shortly after the party nominees had set up campaign headquarters in the state for the first-in-the-nation primary.

Driving around New Hampshire with Al Cincigliani, a fellow collector and friend, Dunham, like a magpie, looks for anything that catches his eye, including campaign buttons, bumper stickers, and even press passes.

As collectors with day jobs, Dunham, a project manager, and Cincigliani, an accountant, have time for only short trips to political battlegrounds like Concord, New Hampshire, and only on weekends. To locate memorabilia, they visit campaign headquarters, fundraising events, and the occasional protest. Cincigliani said he once visited 15 campaign offices on a single Saturday before driving back to his home in Providence late at night.

Their interest in the current primaries, however, sets the pair apart from their fellow collectors. They are members of APIC, the American Political Item Collectors, a tight-knit community of more than 2,000. Most members hold little fascination with memorabilia from the ongoing primaries and focus instead on older, more valuable items.

Dunham said that he and Cincigliani aren’t in it for the money like most collectors. It’s a hobby. Even if they were looking to profit from their decades worth of hauls, selling pins for $5 could barely cover his family’s electric bill, Dunham said. But something as insignificant as a campaign button can fetch hundreds of dollars at auctions. Ronald Wade, a dealer in political memorabilia, said that immediately after Obama’s inauguration, buttons emblazoned with the new president’s face sold for 10 to 20 times the price at which they were first bought.

Monetary value of political memorabilia is based largely on scarcity. Wade said once a button was released online by vendors affiliated with party nominees, its price plummets. But a button produced in small amounts for the local Democratic Party’s headquarters could gain substantially in value.

Wade has been doing this a long time. Collecting and selling political memorabilia from George McGovern’s 1972 presidential campaign helped him pay for college. He said he only sells when he wants to buy.

Dunham follows the same principle. Collectors plow back all profits into their memorabilia funds, creating an almost self-contained economy.
Like most political tourists, Dunham is a partisan. Of all the candidates, he dislikes Donald Trump and Ted Cruz the most.

Yet when asked where they were heading to next, he and his partner said they would make a stop at Cruz’s campaign headquarters to ask his staff for some buttons.