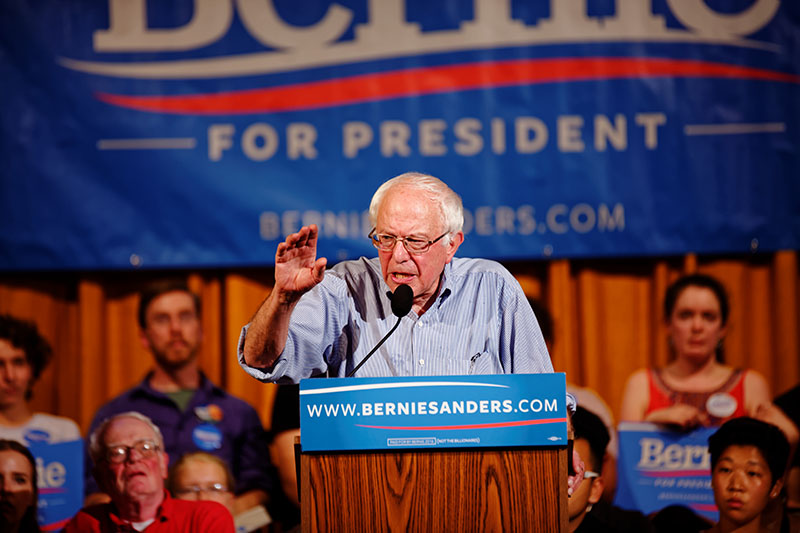 The weekend before New Hampshire’s 2016 primary I joined 26 NYU graduate journalism students and four professors on a pre-primary reporting trip. Being from Norway, the self-avowed “democratic socialist” candidate, Vermont Senator Bernie Sanders sparked my interest. So imagine my thrill when I learned I would be attending a Sanders’ speech at the Verizon Center in downtown Manchester.

There, the mass of Bernie supporters cheered madly as Sanders reeled off a string of progressive hits: campaign finance reform, regulating Wall Street, breaking up the big banks, expanding social security and healthcare, reforming the criminal justice system, providing free college and a break on interest rates on school debt, universal childcare, income and gender inequality. To many (read: Hillary supporters) it sounded like the usual pie-in-the-sky rhetoric. To a Norwegian, however, it sounded like life as usual, because in socialist Norway we have all of this and more. Which is why Sanders has suggested the United States become more like my country.

Viewed through Sanders’ rose-colored glasses, Norway must appear a socialist paradise, where everyone is well off, beautiful, healthy, and roughly equal, entitled to free childcare, education, and a generous safety net. Not everyone shares this fantasy, of course. For Americans across the political spectrum the word “socialism” conjures visions of a strong, rigid central government, inefficient state-owned enterprises, overly generous welfare benefits, single-payer healthcare, and sky-high taxes. In their minds it is a world turned upside down: the hardworking are penalized for succeeding; the lazy are rewarded for not having a job. People are encouraged not to work too hard (six weeks paid vacation, shorter workdays in the summer, the list goes on). There’s a bigger focus on personal self-realization rather than financial success. People don’t worry as much about money, probably because they don’t have to.

Although the corporate tax is technically lower in Norway, effective tax rates flip the coin. Still, this doesn’t seem to discourage businesses. The state-owned organization Innovation Norway helps fund promising start-ups and R&D in more established companies that is eligible. Besides, Norwegians aren’t afraid of taxes like Americans are. They view it more as a purchase or investment in services, and they’re confident the government will deliver.

While Sanders has long labeled himself “a democratic socialist,” he resorts to linguistic jiu-jitsu in trying to explain what he means by it. He knows he has to be careful; socialism is a powerful word west of the Atlantic. A Gallup poll conducted last year found that half of Americans would refuse to vote for a socialist. So Bernie takes great pain to emphasize that his flavor of socialism isn’t like your father’s socialism of planned economies, state ownership of the means of production, nihilistic five-year plans, or prison camps. Instead, his socialism, he told Democracy Now, is:

“making sure that as a right of citizenship, all of our people have health care; that as a right, all of our kids, regardless of income, have quality childcare, are able to go to college without going deeply into debt; that it means we do not allow large corporations and moneyed interests to destroy our environment; that we create a government in which it is not dominated by big money interest.”

In other words, Bernie’s brand of socialism “is democracy with a small ‘d.’” It lacks the key ingredient that makes socialism socialism: an element of state ownership, an idea he rejects. In a speech late last year he said, “I don’t believe government should own the means of production, but I do believe that the middle class and the working families who produce the wealth of America deserve a fair deal.”

Sanders’ philosophy seems more deeply rooted in what you might call compassionate capitalism. Whatever you call it, though, Sanders will have a hard time promoting Norwegian ideals in capitalist America.

First, cost. Sanders health care plans alone could run up to $15 trillion over ten years, a number his campaign said was a fair calculation, according to the Wall Street Journal. To give you an idea how much that is, the wars in Iraq and Afghanistan have cost a combined $6 trillion. Meanwhile the federal government spent around $3.9 trillion in 2015. Add to that his plan to make public college free and lessen student debt and the government couldn’t print money fast enough to cover it all.

Sanders claims it would be financed by increased taxes on the wealthy as well as taxes and fees on the financial industry. The tax level in Norway is 39.1%, versus 26% in the US. Raising taxes to Norway’s levels wouldn’t come anywhere near covering the cost of his programs. In addition to tax revenues, however, Norway has massive oil wealth and owns the biggest Sovereign Wealth Fund in the world. A maximum of 4% can be used to cover budget deficits. And lets not forget about scale. We are talking about Norway with a population of 5 million, as oppose to the United States with 318 million. It’s hardly comparable.

As for feasibility, Sanders would need a Democratic majority in the House of Representatives, and some of his views are too leftist for some centrist democrats, so he’d need a big majority. It’s unlikely any republicans would vote with Sanders. Some Bernie supporters acknowledge this; others believe it could work.

“I think the best thing would be that he represents a third party,” said David Zackon, a Bernie supporter, from Massachusetts. “It’s like the left finally having a tea-party.”

Ken Rowland, the First Vice President of a Connecticut union, UAW Local 751, says that Sanders proposals are realistic and will pass as long as the people unite behind him. “[Sanders] needs a ground swell of people that says ‘we want this change,’ and then politicians will start will start listening to it. If he can get a democratic congress there’s no reason why he couldn’t pass a lot of his initiatives”

I’m skeptical. For people to unite there has to be common ground, in this case, a strong consensus to give government more power. Americans in general don’t trust their government. Contrast that with Scandinavia, where equality is a fundamental value. Research indicates that trust is a key component for socialism to work.

The day after the speech I visited Bernie Sanders’ campaign office in Manchester. Only a handful of staff remained, as they packed up for South Carolina, the next stop on the primary circuit, and no one would talk to me unless I went through “comm,” short for communications.

But I couldn’t help but notice that the man who vowed to break up the big banks had opened up his campaign office over a Citizens Bank, which had been fined $21.8 million last year for shorting depositors. Surely there was a metaphor in that.